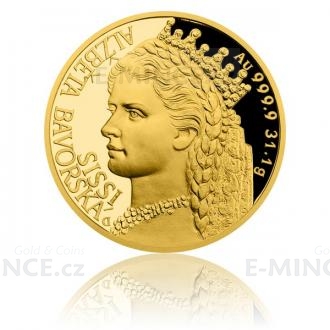 Men from all over Europe desired her, the women envied her - such was, at first glance, Elizabeth Bavarian, who had been known as "Sissi". The Empress, to who belongs the second ounce gold coin from the Czech Mint from the cycle Fate Women, however, did not live a romantic fairy tale.

When the German princess became the wife of Emperor Franz Joseph I., she was not prepared for what the Austrian court had planned for her. The exhausted husband who ruled a vast multinational empire had little time for his wife. Moreover the strict mother-in-law tried to seize a sixteen-year-old girl with the rules of the court label. On the one hand, Sissi submitted and fit perfectly the cream of society in the 19th century, but on the other hand she remained stubborn inside. Despite the reproaches she rode a horse, she still had her own way and expressed her undeserved love for Hungary. The unfortunate double life which was accompanied by a number of personal tragedies, caused Sissi depression and other psychological problems. She was obsessed with her appearance, and combined starvation with unreasonable physical effort. She loved physical activity and exercise, and she weighted herself several times a day. At a height of 172 centimeters, her weight never exceeded 50 kilograms, 5 of which were her well-kept hair. She cared for it for several hours every day, and her royal court hairdresser always had to calculate how much hair she had left on her comb. Although Sissi and Francis Joseph fell in love at first glance, their relationship cooled with time - the Empress even sanctified the relationship with his mistress. But their love did not fade away. When Sissi, by unfortunate circumstances, died because of the Italian anarchist, the monarch never completely recovered from her death.

The reverse side of the coin made by expert medal maker Vojtěch Dostál, DiS., was completely devoted to the portrait of the Empress with a detailed sophisticated elaborate haircut. The inscription gives her full name and the nickname ELIZABETH BAVORIAN - SISSI. The beauty of the female ruler is underlined by the crown, the veil and the necklace. The obverse side of the coin then belongs to the nominal value of 50 DOLLARS (NZD), the name and portrait of Queen Elizabeth II. together with the year of the issue 2017, which means the attributes of the coin issuer of the Czech Mint which is the island of Niue.

After the legendary ancient beauties Helena Trojská and Empress Sissi, Ema Destinnová will also appear on the gold coins from the cycle Fate Women.