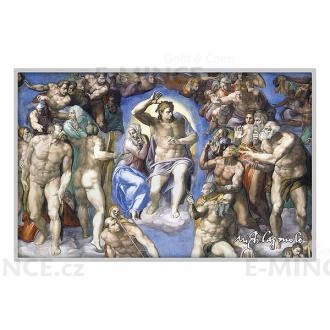 ‘The Last Judgment’ coin has been issued as part of the ‘Vatican’s Divine Angel’ series, depicting the frescoes from the Sistine Chapel ceiling which tell the history of mankind from the creation of the world, through the original sin to the biblical flood. Created by the extraordinary artist and genius – Michelangelo Buonarroti, were painted between 1508-1512 and they are already over 500 years old! The crowning touch to the series is the altar scene, painted by him between 1534-1541 which depicts the final Judgement.

In the middle of the ‘Last Judgement’ scene, the artist placed the figure of Jesus surrounded by the crowd, who wears a violet coat the colour of which refers to the kingdom or atonement. On his right, there is Mary, turning her gaze away from the people punished by her son. At the feet of Christ the artist painted two saints: Lawrence and Bartholomew. In Italian, the name Lawrence is translated as ‘Lorenzo’. This is Michelangelo’s tribute to his patron and guardian: Lorenzo Il Magnifico.

Crystal clear precious metal, extremely limited mintage and the work of art of an outstanding artists that is admired every year by millions of tourists from all over the world… Owning such a prestigious coin set is an honor! Without doubt, it will become the pride of your valuable collection!

The series encompasses the following coins: