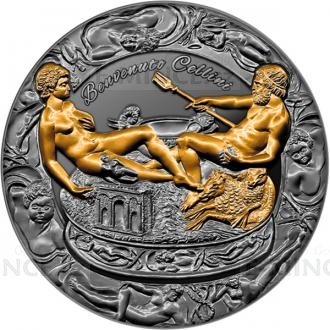 Some of the most beautiful things in the world simply take our breath away. One of them is a salt cellar created by Benvenuto Cellini (1500-1571), ‘the greatest goldsmith in the world’ according to Michelangelo. This Renais- sance Italian sculptor had an exceptional talent. He was able to create genuine miracles using gold, silver, wood and marble. The world-famous artist had been working for the most a luent and mighty people of his time. He created many outstanding objects of art, including the most valuable and superior one – the salt cellar ordered by Francis I of France. Cellini had been working on his masterpiece for three years.

A priceless description of Cellini’s work can be found in his diary: „(Saliera) was oval in shape, about 30 cm tall, hammered in gold with the use of a stylus (...). The Earth was depicted as a woman in her utmost beauty, with elaborately decorated temple next to her. I have put flowers in her hand, overflowing with natural abundance. Below the figure, in the land part, I have depicted magnificent animals. In the sea part, respectively, I created so many species of fish and shells that one could barely imagine on such a small surface”. Next to Neptune, Cellini placed a ship – a salt container, while pepper was served in a temple next to Ceres. The base of the sculp- ture is decorated with the personifications of four winds, times of day and symbols of human activity.