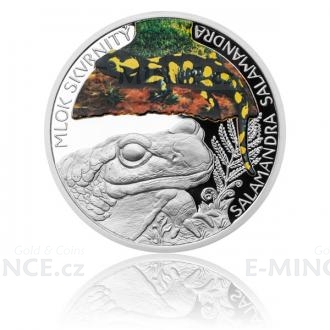 The distinctive black and yellow drawing of an unmistakably coloured amphibian, that finds hiding place from the sun mainly in the rocks, under the stones and under the bark of trees, is essentially a warning to other species. Yes, we are talking about fire salamander, another beautiful creature included on the endangered species list of the Czech Republic. The latest issue of unique Smart silver 1 NZD coin by The Czech Mint is dedicated to it.

Decrease of fire salamander in wild nature was caused by human beings; by planting of spruce monocultures, deforestation, water pollution and in particular by the massive growth of car traffic. Its capture for farming purposes is therefore forbidden by the Berne Convention. Salamander is primarily characterized by its nightlife and during the day it looks for a quiet retreat in the nature. It leaves its daily shelter after rain, when it looks for food, which mainly consists of earthworms, millipedes, spiders, insects, worms and slugs. Salamander spends the winter in groups below the ground.

Home of the visible amphibian is the Southern and Central Europe, the Southwest Africa and the Western Asia. In the Czech Republic, the presence of salamander, with a few exceptions, is recorded in the whole territory. Its natural habitat is moist deciduous and mixed forests. Fire salamander prefers altitude of 200-600 meters above sea level, but it is not exceptional to meet him in the lowlands and in the mountains. To reproduce, it needs water, where the female releases larvae. Therefore it searches vicinity of watercourses, ponds or wells. In the wild nature they live up to 20 and in captivity up to 50 years.

Attractive coloured coin features, on the obverse side, the original view of the beautiful animal from two angles, along with its Czech and Latin name MLOK SVRNITÝ – SALAMANDRA. Extremely successful design of both sides was prepared by academic sculptor Majka Wichnerová. She prepared a tasteful composition of issuer`s attributes and a nominal value of 1 NZD for the obverse side of the coin. The coin is served in a colourful illustrated blister and its edition is limited to 1000 pieces. Unconventional mintage will please experienced collectors, as well as it will give impetus to the establishment of the first collections of beginning numismatists.