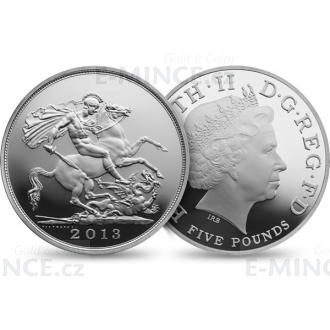 The official commemorative coin of the Royal Birth


As the nation rejoices at the safe arrival of a future heir to the throne, Prince George, The Royal Mint commemorates the birth of a royal baby for the very first time. And as befits a baby that is destined to be sovereign, we have chosen a design made famous on the most royal of coins, the Sovereign itself. St George and the dragon, instantly recognisable, has been struck in silver for the first time in over 100 years, on a £5 crown-sized coin – beautiful, impressive and very special.

The birth of the first child of the Duke and Duchess of Cambridge has been celebrated around the world. And it is important that we mark such momentous news for the nation in suitable style. What could be better than this most special coin, an official reminder of the Royal Birth? St George and the dragon was created by one of our most famous engravers, Benedetto Pistrucci, almost 200 years ago. It has become the definitive Sovereign design but in 2013, for the first time since the coronation of Edward VII, it has been struck in silver – a majestic tribute to the future monarch and an exceptional coin indeed.

St George and the dragon in silver

In 2013, this most royal of years, Pistrucci’s famed design appears on a silver crown-sized £5 coin, struck to our unrivalled Proof finish. Only 10,000 coins will be available and they must satisfy demand from collectors keen to own this hugely desirable coin – for the opportunity to own St George and the dragon in sterling silver comes so very rarely. More than half those coins have already been allocated and an early order is recommended.

Pistrucci’s St George was first struck on a silver crown in 1818. Years later its beauty commended it as the Deputy Master of the Mint, Charles Fremantle, revived it for the Sovereigns of Queen Victoria in 1871. In 1887 the design was once again struck on a silver crown and was last minted in the coronation year of Edward VII. Pistrucci’s St George – one of the most famous coin designs in the world – has not been struck in silver since.

But in 2013 as we begin a new tradition and mark a royal birth – a first. St George and the dragon appears on a £5 crown-sized coin struck in sterling silver, our most famous design chosen to mark such an important event for the nation. It is both classic and unusual, as befits the arrival of the third in line to the throne. There is a strict limit of just 10,000 coins, each struck to flawless Proof quality and presented with a Certificate of Authenticity.