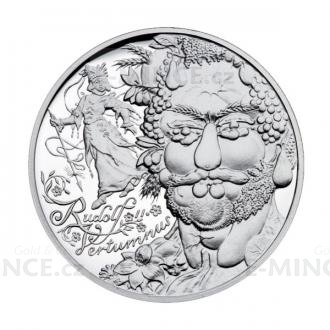 Italian painter Giuseppe Arcimboldo was one of painters to find refuge at the court of Rudolf II. He created imaginative portrait heads composed entirely of painted animals, flowers, fruit and other objects. Some of his paintings are satirical portraits of people living at the court, others are alegoric personifications (spring, summer etc.).

In 1587 Arcimboldo returned to Milan but remained in contact with the Emperor. At the end of his life he sent him a painting portraying Rudolf II as the antique god Vertumnus.

In the Roman mythology Vertumnus is a god of change, seasons of the year, plant growth, as well as gardens and fruit trees. According to Ovid’s Metamorphoses (Book XIV) he could change his form at will, and he tricked beautiful Pomona, the goddess of orchards and fruit trees, into talking to him and marrying him by changing himself into an old woman.

The obverse side of the medal features an autoportrait of Giuseppe Arcimboldo consisting of paper rolls and dates of the artist’s birth and death.

The reverse side is dominated by the portrait of Rudolf II as Vertumnus – with a smaller picture of Pomona – the goddess of orchards and fruit trees - on the left.