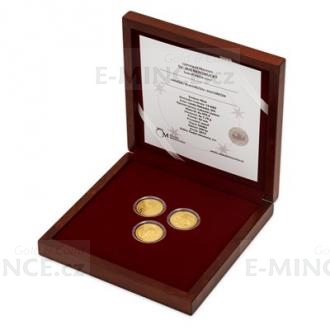 The martyr, the patron, the saint, the legend - we all imagine this when pronouncing the name of John of Nepomuk. His story is commemorated by a set of three gold coins that was issued by the Czech Mint on the occasion of his canonization.

John of Nepomuk heard his wife Zofia's confession during the reign of King Wenceslas IV. The confessor refused the sovereign when he tried to find out the queen's secret. It did not break even the cruel torture that had become fatal to him. The tortured body was thrown from the Charles Bridge into the Vltava River, and John of Nepomuk was forgotten forever. But then there was a terrible drought that was probably caused by the anger of God himself. The body was discovered, buried, and the legends were told about the devotion of John of Nepomuk. The martyr's resting place was reopened three centuries later and an unexpected miracle was revealed. Inside the skull there was a well-preserved, red tongue that once refused to speak. John of Nepomuk was beatified, and very close to his canonization. John of Nepomuk was declared the saint in 1729. He became a patron of Bohemia and Bavaria, and his cult was spread throughout the world. Christians in Europe, Latin America, and Asia ask him for help.

Three coins that remind the martyrdom, beatification and canonization of John of Nepomuk were made by the medal maker Lenka Nebeska, DiS. The reverse side of the first coin depicts the overthrow of the martyr from Charles Bridge. "John of Nepomuk as a patron with his attributes became the dominant feature of the reverse side of the second coin. The attributes are the halo, the cross and the palm leaf. At his feet there are stylized waves and fish as a symbol of silence and Jesus Christ. The depiction of the bridge and the water refers to the fate of John of Nepomuk, but it is also a symbol of the protection of fishermen, sailors and bridges, as well as flood aid. The angel holding the lock and putting his index finger to the mouth represents a confessional mystery," the author explains. On the reverse side of the third coin you can find a forefinger attached to the mouth - this time the silent gesture is reserved by the saint himself. The obverse side of all three coins bears the name and the portrait of the Emperor Elizabeth II, the year of the issue 2019, and the nominal value of 10 DOLLARS (NZD), which means the attributes of the island of Niue, which provides the Czech Mint with a foreign license to coin its own commemorative coins. All the coins have a common element in the form of five stars that should appear above the surface of the river after John's death.

Five stars in the form of a saint's halo can be also found on the lid of a luxurious wooden box in which the coins are stored. They are accompanied by the Latin word TACUI - "I kept silent." The schedule of issuance counts only 200 pieces of complete sets.
Related products