You are here:Home»Czech & Slovak»Czech Mint 2022»Gold»Ducat Series CR 2022 - The First Coronation of the Czech King - Set of Four Medals 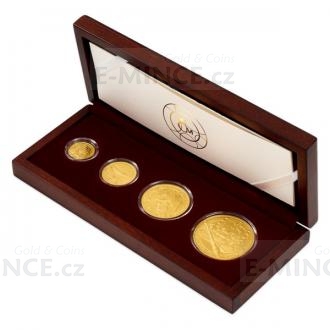 Charles IV was crowned King of Bohemia in 1347. On the occasion of the 675th anniversary of this historic event, the traditional Ducat series of the Czech Mint is being published, consisting of four gold coins.

Charles IV became King of Bohemia after the death of his father, John of Luxembourg, who fell in the memorable Battle of Krescak in 1346. However, as a strongly religious man, he longed to be solemnly crowned, as he considered this act to be a confirmation of God's will. The coronation was scheduled for 2 September 1347 and was a truly extraordinary event. The coronation ceremony, the form of which was according to the vision of the king himself, took place in the under-construction St. Vitus Cathedral at Prague Castle, but it was preceded by a coronation vigil - a prayer at another sacred place, Vyšehrad. The king and queen, who was Charles's first wife Blanche of Valois, were crowned for the first time in history by a Czech ecclesiastical dignitary - the first Czech archbishop and Charles's good friend Ernest of Pardubice. The legendary St. Wenceslas Crown, which was created for this purpose, rested on the king's head...

The obverse sides of each ducat are dedicated to various aspects of the first Czech coronation of the Czech king. The ducat is decorated with a portrait of the King and Queen in St. Vitus Cathedral, the two-ducat presents the royal procession in front of Vyšehrad Basilica, the five-ducat shows the Archbishop crowning the King and the ten-ducat bears the crown jewels. The reverse side, which is common to all four coins of the Ducat series, presents a charismatic portrait of Charles IV and the facade of St. Vitus Cathedral. All this is the work of the medal maker Asamat Baltaev, DiS.


The four gold coins are stored in a luxurious wooden etui supplemented with a special certificate of authenticity, which presents the course of the memorable coronation.
Related products