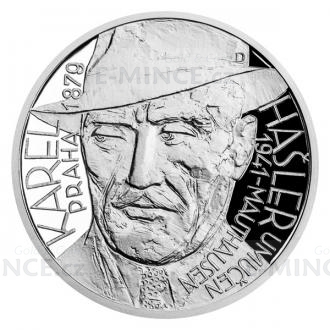 The last silver medal from the cycle of the Czech Mint entitled National Heroes pays tribute to Karel Hašler - a versatile artist and a great patriot.

During the dark times of the Protectorate of Bohemia and Moravia, courageous people from all strata of Czech society joined the anti-Nazi resistance, and famous artists were not missing among them. The highest officials of the occupation regime were well aware of the influence of the cultural elite on the mindset of the population, and therefore even famous and popular faces were not spared their wrath. Karel Hašler belonged to the most famous personalities of First Republic culture who were deprived of their lives by the Nazis. The star of Prague cabarets and the silver screen became famous especially for his touching songs in which he expressed his love for Prague, for Bohemia and for the people who lived there with all their joys and sorrows. But Karel Hašler did not only sing about the Vltava River and Vyšehrad - his patriotic guitar did not spare his defiant satire and political commentaries, which were noticed by the Gestapo. Members of the secret police came for the singer directly to the filming set and sent him to the Mauthausen concentration camp. Karel Hašler never returned home - he died at the age of sixty-two as a result of brutal beatings, torture and untreated illnesses. But he was certainly not forgotten...

"The obverse side of the medal is dominated by a portrait of Karel Hašler in a hat, with a polka-dotted tie. On the left there is the text KAREL, PRAHA 1879 followed by the text HAŠLER, UMUČEN 1941 MAUTHAUSEN (HAŠLER, MARTYRED 1941 MAUTHAUSEN) on the right," says academic sculptor Jiří Dostál. "The centre of the reverse side is filled with a part of the verse with Hašler's last message - VY ČECHY KRÁSNÉ, TY PRAHO MOJE, BUDETE ŽÍT, JÁ UMÍRÁM (BEAUTIFUL CZECH LANDS, MY PRAGUE, YOU WILL LIVE, I AM DYING). In the lower part, the text, written in free italics, touches the outline of Hradčany, which is burrowing into the score line. The composition is enclosed by four "unpleasant" segments that resemble a swastika," adds the author of the medal.

An integral part of the medal is a spectacular packaging in the form of a book, which contains a treatise from the pen of historian PhDr. Petr Koura, PhD. Remember that you can store the complete collection of fifteen medals with nineteen national heroes in a practical collector's box.