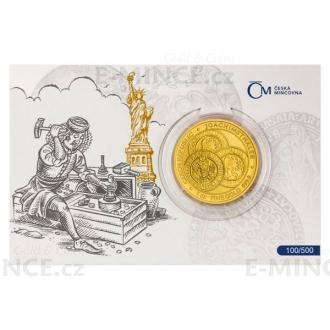 The collector's version of the investment coin is stored in a special packaging that is numbered. The schedule of issuance of this variant has only 500 pieces.

How did the Jáchymov tolars become US dollars? The Czech Mint will remind you this incredible story via investment coins minted from one troy ounce of pure gold.

Lightning rod, propeller, blood groups, genetics, contact lenses, sugar cubes or the word robot - all this is the work of our ingenious compatriots. But only a few people know that we have also provided the world with its most famous and recognized currency. Which one is it? A dollar! Somewhere in Texas, none of them probably know that the roots of their famous currency go back to a mountain town in a small country in the heart of Europe. Therefore, it is worth to remember the Czech heritage, whose history began to be written five hundred years ago… The Jáchymov tolar was a silver coin that originated in the Czech Kingdom in 1520. Extraordinarily high-quality currency spread throughout Europe and its success encouraged others to mint a number of imitations. The Czech tolar thus became, for example, the Dutch daler, which was used, among other things, in the American colonies. The dollar was then created by further distortion of the Czech word.

While the reverse side of the coin, which was processed by designer Ladislav Vraný, presents three Jáchymov tolars, you will find three American dollars on the obverse side. This is the motif of the very first coins minted by the United States in 1794, which borrowed from their Czech ancestor not only the name, but also the weight and purity of the metal. Since the coins of the Czech Mint are licensed by a foreign issuer, the island of Niue, their obverse side also bear its necessary elements - the coat of arms, the nominal value of 50 DOLLARS (NZD) and the year of issue 2021.
Related products