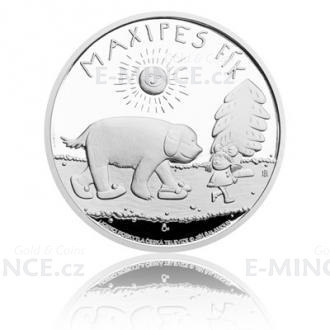 One hundred of intriguing love stories written by the founder of the Italian Renaissance prose Giovanni Boccaccio – it is the Decameron, one of the most famous literary works dealing with the joys and dangers of love, that inspired The Czech Mint to create a series of ten silver medals. The first of them was issued in 2013 on the occassion of the 700th anniversary of the writer's birth. Every year, during five years, two pieces of art are created and they are attractive challenges for refinement of your numismatic collection. Another addition is a medal, with the motif of the story About the law, in an extraordinary proof quality.
The Decameron was created between 1348 and 1353, when the plague broke out in Florence and townspeople tried to avoid the infection by fleeing. The main heroes of the book - Pampinea, Fiammetta, Filomena, Emilia, Lauretta, Neifile, Elisa, Panfilo, Filostrato and Dioneo – escaped together to the countryside, where they wanted to survive the period of plague. To pass the time, they were telling love stories every day.


Filostratus tells the story of a noblewoman Filippa. She, along with her husband, lived in the region of Prat, which was renowned for its harsh laws and where adultery was punished by being burned. Fillipa`s housband wanted to apply just this law, one evening, when he found his beautiful wife in the arms of a young Lazzarini de 'Guazzagliotri, the object of Filippa`s very deep feelings. However, the woman described the law at the court as a bad law, because during its creation there was not a single woman there. After the court revealed that she gave herself to her husband whenever he asked for it, and therefore the marriage was consummated.She also defended that if a woman can offer more love than required by her husband, she also can serve another man. The law was changed due to her speech and she was freed.

The topic of this story is traditionally realized by academic sculptor Vladimír Oppl. The obverse side of the medal features a scene depicting the moment when the husband caught his unfaithful wife in flagrante with her lover. Background of the obverse side is formed by the motif of the tree of life that links the entire series. Another common feature of the issues from the cycle is an erotic token - Roman Spintriae. The reverse side of the medal includes the portrait of Giovanni Boccaccio, along with the Town Hall in Certaldo and the house where he lived and worked. Only 500 pieces of the silver medals are ready to embellish your exceptional collection!