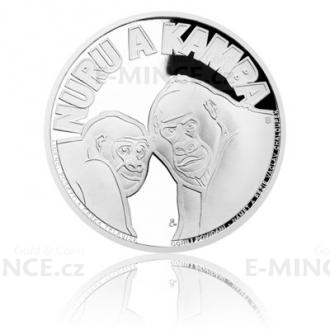 Natural world continues to fascinate and surprise the humankind. But it is not only an endless source of information, since the beginning of time, it also serves as an inspiration for film makers focused on programs for children. Animal adventures are very close to children, perhaps because they are able to understand them from an early age. The real master of such stories is well-known author of bedtime stories called Večerníček,Václav Chaloupek, who presented stories from the realm of animal friends in the form of charming series. On the occasion of the 50th anniversary of the first broadcast of Večerníček on TV he also paid a visit to the family of apes with the camera and prepared an exceptional cycle Gorilla`s tales for young viewers. For all that, new silver Smart coin 2 NZD by The Czech Mint is dedicated to it.

Director Václav Chaloupek found the topic for this attractive bedtime story in the Prague Zoo, where he was inspired to film the thirteen-part series by a family of gorillas: mum Kijivu, dad and leader of the herd Richard, naughty gorilla boys Kiburi and Nuru and auntie Kamba, who was the only one born in Africa. This allows her to tell gorillasfunny stories about their homeland and the other inhabitants of the black continent. Step by step and in an attractive way zebras, elephants, rhinos, antelopes, lions, buffaloes, warthogs, baboons and giraffes are introduced not only to gorillas, but also to children by Kamba.

Bedtime stories Gorilla`s tales premiered in 2015 on the occasion of 50th anniversary of bedtime story broadcast by the Czech Television. Director and writer Václav Chaloupek, whose previous series about animals gained great popularity among all generations of viewers, filmed in various parts of The Prague Zoo and directly in Africa.

Večerníček series of coins by the Czech Mint is celebrating 50 years of Czech film art and at the same displays medallists` skills. Coin of pure silver in proof quality presents an excellent job by Irena Hradecká, DiS to numismatists. She created a tasteful composition of two gorillas - little Nuru and his auntie Kamba on the reverse side of the coin. It is completed by the logos of the Czech Television and the Prague Zoological Garden. The obverse side of the coin is formed by the essential issuer`s attributes. Silver coin 2 NZD Gorilla`s tale is a genuine collector's item and an attractive gift for all small and big lovers of fairy tales.