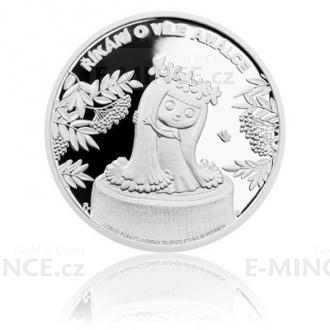 Tales stimulate the children`s imagination, help them find sense of justice and beauty. Bedtime stories (Večerníček) are unique format of charming short stories. Children and even adults cannot imagine their nights without them in the course of almost half a century. During that time many charming series were created, among them a fragile fairy with long hair and daisy wreath has her place of honour. Yes, you guess, we are talking about Amálka. This animated beauty celebrates her important anniversary – she was born just forty years ago on a meadow. The Czech Mint is, of course, amongst the well-wishers, with its original gift - a silver 2 NZD coin.

Favorite cartoon series premiere was hold in 1975 and immediately won the children`s affection. Amálka was born out of the fog. She looked into the well, and saw how beautiful she was, and wonderful adventures begun. She was helping her friends and delighted them with her dances. While traveling she meets with the lamb Kudrna, bandit Vešmyška, little man Trneček, nutty doll, water sprite Kebula, Kordulka, Široká bába and others, perfectly described by the writer Vaclav Čtvrtek.

Thirteen parts of bedtime story were filmed with success due to the experienced team. Director Václav Bedřich, who had already created Maxipes Fík or Bob and Bobek, really enjoyed that creation. He directed, but also painted Víla Amálka. Stories are underlined by wonderful music by Jíří Kolafa and the magic world is guided by the particular voice of Jiří Hrzán. Stories about Víla Amálka, for the former Czechoslovak Television, were produced by Krátký film, Studio Bratři v triku.

Beautiful manufacturing of both sides of the coin of pure silver dedicated to Amálka, was prepared in the studio of the medalist Irena Hradecká, DiS. The reverse side of the medal managed to capture the marvellous fairy in all her glory. The image is accompanied by a text about the Víla Amálka. The obverse side depicts a tasteful composition formed by issuer`s attributes. Smart silver 2 NZD Víla Amálka coin is a little gem for all collectors, who reflect Czech culture in their collections . However, the adorable medal opus, may also be great treasure in the collections of the smallest numismatists!