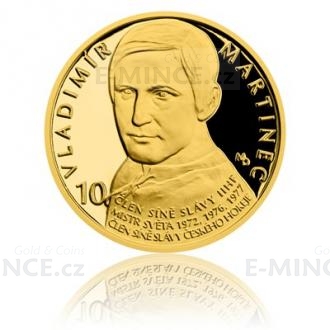 In the series entitled Legends of Czechoslovak Hockey there are alongside the Olympians from Nagano their famous predecessors from the 1960s and 1970s. Few hockey players can claim to have contributed to the success of both generations. One of them is Vladimír Martinec, who is commemorated by the Czech Mint on the gold coin.

The right wing, a double Olympic medallist and a three-time world champion… The redoubtable scorer, who was made famous by erratic loops, was one of the leading figures of the famous Czechoslovak generation who taught the Soviets in the 1970s what defeat meant. What was the key to the success of Vladimir Martinec, who still belongs to one of the greatest stars of the Czech hockey school? The gift of improvisation, infallible intuition, great condition, talent, cleverness, determination to work hard, but also a sense of humor and boundless optimism, which Martinec expressed with his famous smile ... He then scored other big triumphs as a coach - for example, as an assistant coach to the "golden boys" contributed to the triumph of the national team at the Nagano Olympics.

Medal maker MgA. Martin Dašek dedicated the reverse side of the coin to the portrait of a hockey player surrounded by an inscription VLADIMÍR MARTINEC, MEMBER OF THE HALL OF FAME IIHF, WORLD CHAMPION 1972, 1976, 1977, MEMBER OF THE HALL OF FAME OF CZECH HOCKEY. The composition of the reverse side is completed by his jersey number 10. The Czech Mint coins are issued with the foreign license of the state of Samoa, and therefore their obverse side bears the necessary attributes of this issuer – the national emblem, the portrait and the name of Queen Elizabeth II, the nominal value of 25 DOLLARS (WST) and the year of the issue 2019.

The schedule of issuance counts only 200 pieces. You can also find a stylish collector's etui in the form of a puck in the offer of the Czech Mint.