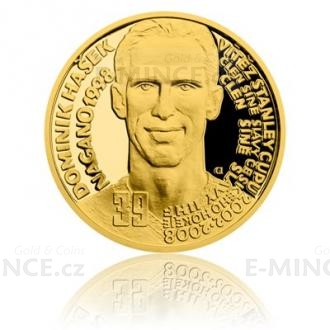 The youngest national goalkeeper in the history of Czechoslovakia, multiple champion of the republic, double winner of the Stanley Cup, the first Czech hockey player to be introduced in the NHL Hall of Fame, Olympic medallist and of course also the Olympic winner… Although the list of Dominik Hašek's hockey achievements - both domestic and international - seems endless, the victory at the Winter Olympics in Nagano, Japan in 1998 made him an infinite, immortal legend. When fans and experts are to nominate a player who contributed to the gold medal, they usually agree – an unbeatable goalkeeper with the appropriate nickname "Dominator" threatened forwards around the world with his superhuman actions. Dominik Hašek's performance was all the more exceptional because the NHL players could participate the Olympics in Nagano for the first time in history, so the best players came against the Czech goalkeeper…

The portrait of the goalkeeper on the reverse side of the coin comes from the studio of Vojtěch Dostál, DiS. (It is interesting that the commemorative medal of the Czech Mint, which was published on the occasion of Dominator's introduction to the HHOF, was created by the medal maker's father Jiří Dostál.) The portrait is surrounded by an inscription: DOMINIK HAŠEK, NAGANO 1998, STANLEY CUP WINNER 2002, 2008, MEMBER OF CZECH HOCKEY HALL OF FAME, MEMBER OF HALL OF FAME IIHF. The composition of the reverse side is completed by Hašek's jersey number 39. The Czech Mint coins are issued with the foreign license of the State of Samoa, therefore their obverse side contains the necessary attributes of this issuer – the national emblem, the portrait and the name of Queen Elizabeth II., the nominal value of 25 DOLLARS (WST) and the year of the issue 2019.

The schedule of issuance of hockey coins counts only 200 pieces. You can save it in a special collector´s etui in the form of a puck.