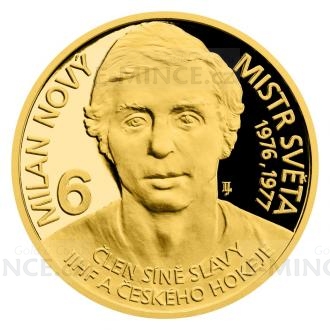 Collector's series entitled “Czechoslovak Hockey Legends” presents the most famous and most successful ice hockey players. This series must not miss Milan Nový. The Czech Mint pays tribute to him by issuance of a gold coin.

"Balík" - the centre, the Olympic medallist, the two-time World Champion and the six-time Republic Champion - was renowned for its hard, accurate and perfectly timed shots. He has scored 470 goals in the highest hockey competition and 120 goals in the national team. He was the first hockey player that exceed 500 goals scored in the league and national team, therefore, he became the best Czech scorer. What was behind his phenomenal record that has not been broken yet? “There was a lot of extra work. In the garden I had a wooden goal with exactly marked four corners, where the goalkeeper is most vulnerable. I hit them for hours and hours. I was running with a seven-kilogram weight for several kilometers in the winter. I was constantly working out – however, not for coaches, but for myself, ” the top-scorer, who came from Kladno and practiced shooting with steel pucks, explains.

The reverse side of the commemorative coin was processed by the academic sculptor Jan Lukáš, and presents a period portrait of a hockey player, supplemented with his jersey number 6, together with the inscription MILAN NOVÝ / WORLD CHAMPION 1976, 1977 / MEMBER OF IIHF AND CZECH HOCKEY HALL OF FAME. The state of Samoa provides the Czech Mint with the license of a foreign issuer, therefore, their obverse sides bear its necessary attributes – the national emblem, the portrait and the name of Queen Elizabeth II., the nominal value of 25 DOLLARS (WST) and the year of the issue 2020.

Remember that you can store your collection of hockey coins in a special collector´s etui in the form of a puck.