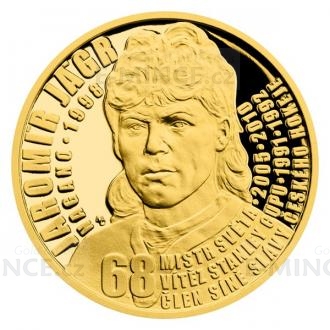 The Czech Mint introduced another "golden boy" - Jaromír Jágr - on the eleventh gold coin from the "Czechoslovak Hockey Legends" series.

“Džegr” still plays as the only hockey player from Nagano's golden team and he is undoubtedly one of the best hockey players of all time. He won the Olympic Games, twice the World Championship and twice the Stanley Cup. Therefore he is a member of the elite Triple Gold Club. Besides the national team, he has played in a number of hockey clubs thanks to his extraordinary skills. It all began with the Pittsburgh Penguins, followed by the Washington Capitals, the New York Rangers, the Avangard Omsk, the Philadelphia Flyers, the Dallas Stars, the Boston Bruins, the New Jersey Devils, the Florida Panthers, the Calgary Flames, and finally the Knights of Kladno. It's hard to believe that thirty years have passed since Jaromír Jágr's draft to the NHL when he was eighteen. How can the forward keep up with a younger players? “You must have the will, even if your body doesn't want to. You have to be adamant and train even more dutifully. If I hadn't been able to do that, I'd probably quit playing. As soon as I couldn't force myself to train, it would be a clear signal for me to end my career, because then I couldn't improve. Miracles do not happen. No one would wake up as ten years younger, ” the hockey player says with an ever-boyish smile.

The reverse side of the commemorative coin was made by the medal maker MgA. Martin Dašek, and it is dominated by a portrait of Jaromír Jágr with an iconic hairstyle. Bust is surrounded by hockey player name, jersey number 68, together with the inscription NAGANO 1998 - WORLD CHAMPION 2005 2010 - STANLEY CUP WINNER 1991 1992 - MEMBER OF THE CZECH HOCKEY WALL OF FAME. Since the Czech Mint coins are issued with the license of the State of Samoa, their obverse sides bear the necessary attributes of this foreign issuer - the national emblem, the name and the portrait of Queen Elizabeth II, the year of the issue 2020 and the nominal value of 25 DOLLARS (WST).

Jaromír Jágr's coin can be stored in a special collector's etui in the form of a puck, where you can store a complete series of fourteen hockey coins.