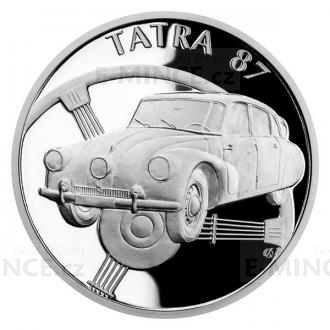 The Tatra 87 has served high government offices, made famous people happy and travelled the world. First of all, however, it was a design and technical gem. The thirteenth silver coin of the Czech Mint from the series entitled On Wheels pays tribute to it.

When the Tatra automobile factory in Kopřivnice introduced the Tatra 77 streamliner in 1934, the professional and lay public was speechless. The world's first mass-produced aerodynamic car seemed like a revelation from the future, but it still had several shortcomings in the areas of design and performance. However, its successor, the Tatra 87, which went into production in 1936, handled these well. A major design innovation was the all-metal, partially self-supporting body. The beautifully shaped drop-shaped saloon car with Art Deco elements had a flowing rear. The Tatra 87 was nicknamed the Eight by the motoring public, which was after the V8 mark in the manufacturer's logo above the middle headlight, which symbolised the forked eight-cylinder engine behind the rear axle. It was the fastest Czechoslovak serial car with a top speed of 160 km/h. In this respect, the Tatra beat most of the world's competitors of the same size - despite their twice as bulky engines - but at high speeds it tended to veer off course, which was regulated by a massive stabilising fin on the rear bonnet. It was a high-end car that offered appropriate comfort and luxury. The Eight was also produced during World War II, when it was particularly popular among Nazi officers for driving on German highways, and it was especially enjoyed by high-ranking Communist officials in the following period. It became a true legend in 1947-1950, when Jiří Hanzelka and Miroslav Zikmund took it on a trip to Africa and South America. She coped with the pitfalls of the wilderness perfectly. Especially the air-cooled engine provided an invaluable advantage in remote areas scarce of water. Today, the luxury car, which represents the pre-war and briefly post-war pinnacle of the aerodynamic range, is one of the most sought-after and valuable collector cars in the world.

The reverse side of the coin, which is the work of medal maker Luboš Charvát, is dominated by a three-quarter view of the Tatra 87. The additional motif of the relief is a detail of a stylish steering wheel. As the coins of the Czech Mint are issued with the licence of a foreign issuer, which is the island of Niue, the obverse bears its necessary elements - the portrait and name of Queen Elizabeth II, the nominal value of 1 DOLLAR (NZD) and the year of issue 2022. Following the title of the collector's cycle, the perimeter of the obverse side is formed by sections of the wheels of various means of transport.