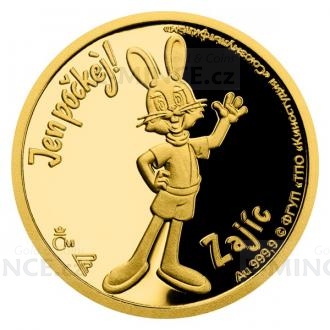 The hare became the hero of the Czech Mint's second gold coin from the five-part miniseries, which is inspired by the immortal Soviet grotesque Well, Just You Wait!

The ever smiling hare has a thin voice, red cheeks and big blue eyes with long lashes. No wonder that some viewers consider him a girl, even though, according to the creators of the animated movie, he is definitely a boy. He is wearing a white turtleneck, a light green T-shirt and dark green shorts. He loves entertainment, culture and sports, and among the places where he is chased by a villainous wolf, we can find, for example, a beach, an amusement park, a museum, a house of a young technician or an Olympic stadium.

The reverse side of the officially licensed coin, which was processed by the medal maker Petr Patka, DiS., who presents him as a cheerful hare as generations of viewers know and love him. The composition is completed by the text JEN POČKEJ! – ZAJÍC (JUST YOU WAIT! – THE HARE). Since the coins of the Czech Mint are licensed by the foreign issuer, the island of Niue, the obverse sides bear the name and portrait of Queen Elizabeth II, the nominal value of 5 DOLLARS (NZD) and the year of issue 2021.

Remember that the wolf coin includes a special collector's album, where you can store a complete collection of five coins.