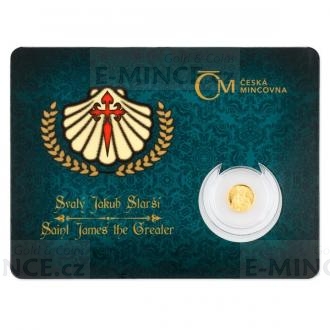 The Czech Mint dedicated the seventh gold mini coin from the Patrons cycle to the Apostle St. Jacob the Elder.

The name Jacob was very popular in ancient times and in Christian legends there is a number of its bearers, who differ in their attributes. Apart from Jesus' brother Jacob the Righteous, these are mainly two apostles - Jacob the Alphaeus, who is known as the Younger or the Lesser, and Jacob Zebedee, who is called the Elder or the Greater. The fisherman Zebedee and his wife Salome had a son, John, beside Jacob. Following in the footsteps of their father, the two brothers became fishermen, and both devoted themselves entirely to the teachings of Jesus Christ. He called them the sons of thunder because of their zeal and tumultuous temperament. Together with Peter, they were among the privileged apostles who took part in the most important and intimate events in the life of the Messiah. After Jesus' death, John became an evangelist, and Jacob and Peter built the early church in Jerusalem. In the end, James was the first of the apostles to undergo martyrdom… As one of the greatest saints, James the Elder is the patron saint of many professions - such as workers, pharmacists, druggists, or warriors. It helps with rheumatism and arthritis and ensures good weather and abundant harvest.

The apostle is often depicted with a book of the Gospel, a pilgrim's staff and a scallop shell, which refers to the Spanish legend of a knight who was saved from the water thanks to "Jacob's mussels". The half-figure of the saint with all these attributes was depicted by the medal maker David Kružliak on the reverse side of the coin. The patron is surrounded by a Czech-English inscription SV. JAKUB STARŠÍ – ST. JAMES THE GREATER. The obverse side then presents the profile and the name of Queen Elizabeth II, the year of issue 2021 and the nominal value of 5 DOLLARS (NZD), which are the attributes of the island of Niue, which provides the Czech Mint with a foreign license to mint its own commemorative coins.

The gold coin weighing one half gram is placed in a special Czech-English packaging. It will serve as an affordable gift and an original addition to the collection or a talisman for good luck.