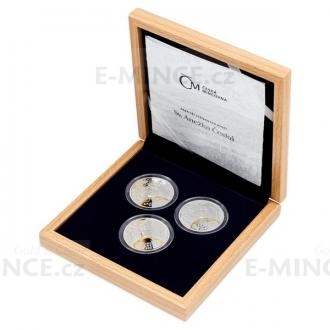 The sets of the Czech Mint composed of silver mintages embellished with selective gilding are traditionally dedicated to religious themes, which are an integral part of our history. This trio of coins pays tribute to St. Agnes of Bohemia.

Agnes of the Přemyslid dynasty was the youngest daughter of King Ottokar I of Bohemia who had big plans with her. The Silesian prince, the Austrian duke, the English king and the Roman emperor gradually applied for her hand, but Agnes, who was freed from parental obedience after her father's death, decided to follow the greatest spiritual challenge of her time - the ideal of St. Francis of Assisi. The princess's entry into the strict order became a European sensation. St. Agnes's courage was also noticed by St. Clare, who then introduced her in her letters to a correct understanding of Franciscan poverty and renunciation. The royal daughter, who renounced her status and property and founded a monastery with the largest domestic hospital of its time, quickly became a lasting example of Christian love. She was considered a saint, and a folk cult, which relied on many proven miracles, was developed after her death. Many great personalities sought her canonization - especially her grandniece Elizabeth of Bohemia and Charles IV. - but their efforts were not effective until more than six centuries later. Agnes of Bohemia was canonized on November 12, 1989 - a few days before the Velvet Revolution. It is like an ancient prophecy was fulfilled, which said that there would be peace and tranquility in Bohemia when Agnes was declared a saint.

The three-part set of coins, which was processed by the medal maker Lenka Nebeská, DiS., presents Agnes as an emancipated princess, an enthusiastic nun and a revered saint. The individual reverse sides of the coins present Agnes's portraits and various attributes - a crown and a Přemyslid eagle; the Lamb of God and the Convent of Saint Agnes for the female branch of the Franciscan Order; the Czech lion and raised hands, whose fingers form a "victorious V-sign". The last scene refers to the connection between St. Agnes's canonization and the Velvet Revolution. As the coins of the Czech Mint are licensed by the island of Niue, their obverse sides bear the name and portrait of Queen Elizabeth II, the nominal value of 2 DOLLARS (NZD) and the year of issue 2021.

A set of coins is stored in a luxurious wooden box.