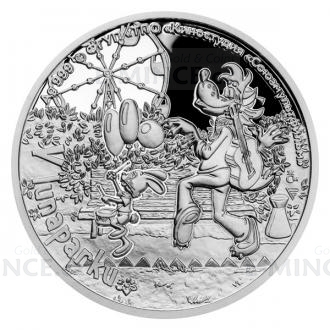 An episode entitled In the Amusement Park became the motif of the Czech Mint's fourth silver coin from a five-part miniseries, which is inspired by the immortal Soviet grotesque Well, Just You Wait!

In the second episode of the series, which premiered on July 18, 1970, the animated heroes set out for an amusement park. The hooligan wolf came here to have fun in his own way - he wants to ruin the fun of other animals. He decides to sing and play the guitar instead of fireworks, and even if it bothers them, they have to admit that he has talent. Because it is night, the little hare gains courage between visiting the attractions by drumming and singing, which attracts the wolf's attention. However, the plans of the eternal loser to catch the hare are thwarted by a helium balloon, a cat illusionist with a magic hat, a centrifuge and a mirror maze. The chase ends in a musical amphitheater, where the wolf performs flawless tango and he is trapped under the piano lid…

On the reverse side of the officially licensed coin, which is the work of medal maker Petr Patka, DiS., you will find a hare with balloons and a drum, which is followed by a wolf with a guitar with a graceful dance step. The composition is supplemented with a Ferris wheel and the text V LUNAPARKU (In the Amusement Park). Since the coins of the Czech Mint are licensed by the foreign issuer, the island of Niue, the obverse side bears the name and portrait of Queen Elizabeth II, the nominal value of 1 DOLLAR (NZD) and the year of issue 2021.

Remember that the first coin with the wolf included a special collector's album, where you can store a complete collection of five coins.