You are here:Home»World Coins»Niue»2021 - Niue 1 NZD Silver Coin Well, Just You Wait! - At the Stadium - Proof 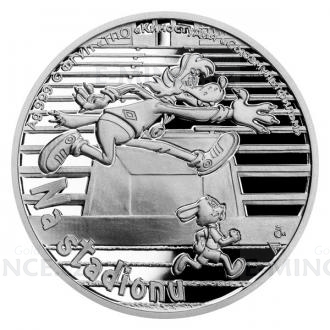 The third silver coin of the Czech Mint from the five-part miniseries, which is inspired by the legendary Soviet grotesque Well, Just You Wait! is dedicated to an episode entitled At the stadium.

Between 1969 and 2017, a total of 22 episodes of the animated series were made (plus one short pilot film), the most famous of which were 16 in the Soviet era. The fourth episode premiered on June 26, 1971. This time, a sports stadium became the site of the clash of the unlucky wolf with a cute hare. A wolf dressed in a sports suit comes here to test his strength with other animals - he will try obstacle running, weightlifting, gymnastics, Greco-Roman wrestling and pole vault, but he completely misses sporting spirit. He is snooty, cheating, mocking, breaking tools and spoiling good fun for everyone. But as always, he gets learned and the hare stays safe - at least until the next crazy chase…

On the reverse side of the officially licensed coin, which is the work of medal maker Petr Patka, DiS., you will find a frightened hare fleeing before an angry wolf on a running track. The composition is completed by the text NA STADIONU (ON THE STADIUM). As the coins of the Czech Mint are licensed by a foreign issuer, the island of Niue, the obverse side beras the name and portrait of Queen Elizabeth II, the nominal value of 1 DOLLAR (NZD) and the year of issue 2021.

Remember that you can store the complete collection of five coins in a hilarious collector's album, which was an integral part of the first coin with a wolf.