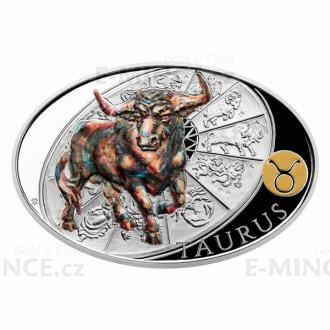 The silver coin of the Czech Mint from the gift series with motifs of 12 signs of the zodiac will become not only a beautiful, but also a valuable talisman for everyone who was born in the sign of Taurus.

The constellation Taurus was named after an ancient Greek legend about Princess Europe, whose extraordinary beauty enchanted Zeus. The ruler of the gods then cunningly transformed into a white bull, so that he could kidnap the beauty and have it only for himself. Like mythical princesses, people born under the sign of Taurus have their own charm, refined taste, romance and sensuality. They often cling to the material side of things, and therefore like to be surrounded by beautiful objects. No wonder - their lives are influenced by the planet Venus, named after the Roman goddess of beauty, love, spring and rebirth. Other qualities of the Bulls in human form are permanence and realism, which, however, can grow into stubbornness.

The non-traditional oval-shaped coin bears a colored image of the Bull on the reverse side. Photographs or computer graphics were not used as a template for coloring - the author of the coin, Asamat Baltaev, DiS., created an original watercolor painting. The relief in the background behind Taurus presents a disk with a dozen zodiac signs. The composition of the reverse is completed by the Latin copy of TAURUS and the corresponding astrological symbol. Since the coins of the Czech Mint are licensed by the foreign issuer, the island of Niue, the obverse side bears its national emblem, the nominal value ONE DOLLAR (NZD) and the year of issue 2021. All this is surrounded by twelve astrological signs.

The coin is stored in an elegant box.