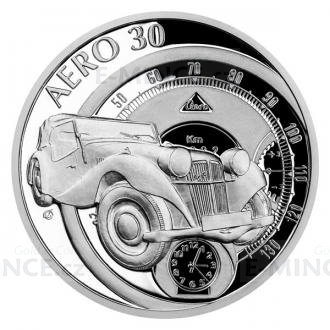 At a time when the great economic crisis was coming to an end, members of the middle class longed for a means of transport that was not only accessible but also representative. This dream came true thanks to the Aero 30, to which the Czech Mint dedicated the ninth silver coin from the cycle On Wheels.

Aero was founded in 1919 and soon became a leading manufacturer of Czechoslovak aircraft. However, both civil and military demand was volatile, so the Prague factory decided to start associated production of unrelated products. Those were, for example, prams, kayaks and sidecars, and the entire automobile department was created in 1928. The first Aero cars were truly popular - at the time they were the cheapest domestic series-produced cars and their price was comparable to motorcycles. Although the tiny aerobos were reliable and popular, their designers decided to show more. The Aero 30 cars were presented at the Prague Spring Motor Show in 1934, when they acted as a magnet - they were also inspected by President T. G. Masaryk himself. The elegant body with a long bow, which resembled English sports cars, gave the thirty the nickname "Czech Jaguar". Gradually, a number of variants were created - two-seater roadsters, four-seater limousines, convertibles, semi-convertibles and estate version. Utility versions included box vans and flatbed trucks. Aero 30 was also excellently used in car races and traveled around the world. It also set out on an expedition to the Scottish lake Loch Ness and proved its qualities on a ten thousand km long expedition on the roads of the Soviet Union. Although it did not discover the Loch Ness Monster, it brought a bear cub from Georgia to the Prague Zoo. The production of the thirty was terminated in 1947 - at the time of the emerging planned economy, when the last series was assembled using stored parts from the war and pre-war period. The total production has reached 7,425 pieces and many of them make their owners happy to this day. The immortality of the red Aero was also ensured by the popular song…

The reverse side of the coin from the studio of medal maker Luboš Charvát presents a convertible supplemented with a tachometer detail, together with inscription of AERO 30. Since the coins of the Czech Mint are licensed by a foreign issuer, the island of Niue, the obverse side bears its necessary attributes – the portrait and name of Queen Elizabeth II, the nominal value of 1 DOLLAR (NZD) and the year of issue 2021. Following the name of the collecting cycle, the circumference of the obverse side is formed by the wheel sections of various means of transport.

The coin is stored in a spectacular packaging that contains accompanying text and period photographs. Remember that you can store your collection of vehicles in quartets in a practical collector's box.