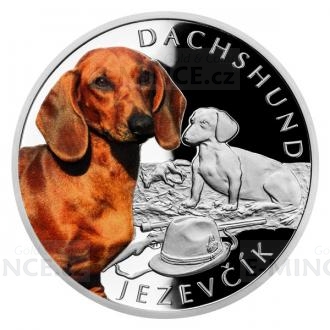 The Czech Mint dedicated the second silver coin from the Dog Breeds cycle to the dachshund.

The forest was an important source of livelihood for our ancestors. While today we can imagine deer or boar meat under the term game, in the past such badgers were also widely hunted. In the forest there were also pests that caused considerable damage to people - for example, foxes, which like to hunt hares and roe deer. Because it is almost impossible for a human beings to catch a badger or a fox living in cramped underground burrows, they called for their best friend's help. Low-legged dogs, known as jammers or miners, began to be bred in order to drive the animals out of their hiding places. This way of hunting is already captured in the picture from the 14th century and specific mentions of "badger dogs" can be found in German books from the 16th century. The image of dachshunds, as we know them today, dates back to 1879. It is a social, friendly and devoted breed. It is a social, friendly and devoted breed. However, dachshunds are also very stubborn, which is related to their hunting breeding. In the burrow, where they had to fight against a dangerous opponent, they could not rely on their master and had to be completely independent.

The reverse side of the coin, which was processed by the medal maker MgA. Martin Dašek, bears two depictions of a smooth-haired dachshund. The first is colored, so the reddish-brown coat of the dog stands out. The second is embossed and presents the earth dog in the company of hunting symbolism - a rifle, a hat and a fox caught. The composition is supplemented with a bilingual inscription JEZEVČÍK - DACHSHUND. Since the coins of the Czech Mint are licensed by the island of Niue, their obverse sides bear the name and the portrait of Queen Elizabeth II, the nominal value of 1 DOLLAR (NZD) and the year of issue 2021. These attributes are supplemented with a number of human and dog footprints.