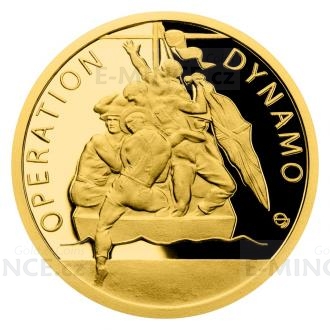 The Czech Mint commemorates Operation Dynamo on the third gold coin from the miniseries War Year 1940. This is the legendary evacuation of Dunkirk.

After France collapsed under the onslaught of blitzkrieg, hundreds of thousands of soldiers were stranded. German troops pushed the retreating British, French and Belgians to the sea - to the beaches of the northern French port of Dunkirk - where they were surrounded and doomed. Winston Churchill described the event as a "colossal military catastrophe" - after all, the core of the British Army Corps was imprisoned in France, which meant that the island kingdom would have no one to defend in the event of an attack. Because the soldiers could not be captivated, it was decided that they had to be evacuated immediately. However, the logistical demands of the operation, which was given the code name Dynamo, were unimaginable. The British fleet did not have enough ships, and those that were available came to anchor far from shore, as Dunkir's beaches sank very slowly. In addition, the sea was full of enemy mines and submarines, and air attacks posed the same danger. The optimistic admiral Ramsay, who commanded the rescue operation, estimated that he would save a maximum of forty-five thousand men. At that time, however, British resistance became apparent - more than 800 vessels were assembled in few days, thanks to the enormous efforts of ordinary civilians who set out to meet France in their barges, sailboats and motorboats. In the end, an incredible 338,226 soldiers who came to the safety of British Dover were rescued, … Unfortunately, they had to leave all their weapons behind. Hundreds of tanks, thousands of cannons, tens of thousands of vehicles and hundreds of thousands of tons of equipment, ammunition and fuel fell into the hands of the Third Reich. "The greatest battle in history is over," said Adolf Hitler, but he was far from winning the war. The Dunkirk miracle united the British nation like never before, and the coming battle for Britain was to turn the Nazis tables…

Medal maker MgA. Josef Oplištil dedicated the reverse side of the coin to the evacuation scene. British soldiers in a small boat leave France and head for the Dover cliffs - they are unarmed but save their proud flag. The reverse composition is supplemented with an inscription in English OPERATION DYNAMO. The obverse side is common to the entire miniseries War Year 1940 - presents the flags of the states that faced the German attack. They have the shape of shields and lightning, which symbolize the Nazi blitzkrieg. Since the Pacific island of Niue provides the Czech Mint with a license to mint its commemorative coins, the obverse side bears its necessary attributes - the name and the portrait of Queen Elizabeth II, the nominal value of 5 DOLLARS (NZD) and the year of the issue 2020.

Do not forget that you can store a complete collection of four war coins in a thematic tin case which you will also find in the offer of the Czech Mint.