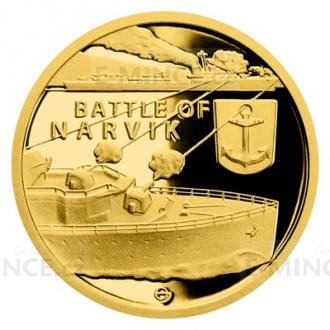 The situation on the battlefields of World War II looked hopeless in 1940. Nazi troops rolled through Europe and won every battle. The moment, when they were defeated by the Allies in the Battle of Narvik, was commemorated by the Czech Mint on the first gold coin from the four-part miniseries entitled War Year 1940.

Narvik is situated far in the freezing north - more than 200 kilometers beyond the Arctic Circle. It is the northernmost city in Norway that is connected to the rail network. The port, which never freezes due to the warm Gulf Stream, is connected to neighboring Sweden via a railway that is used to export iron ore. No wonder, that the Third Reich, whose war industry was dependent on Nordic iron supplies, decided to occupy a strategic area. Winston Churchill, who wanted to deploy British troops in the Narvik area, did not miss this fact, but he did not want to disrupt Norwegian sovereignty. Adolf Hitler did not face this problem… The United Kingdom and the Third Reich decided to act at the same time -the British began to mine the port on April 8, 1940, and the German invasion was launched on April 9. British ships sailed against the German destroyers that landed infantry and occupied the surrounding waters. Initially the forces were balanced and the vessel's losses accumulated on both sides, but in the end the naval superiority of the island kingdom turned out, and the Nazi fleet of ten destroyers was crushed to pieces. The last thing was to deal with the enemy ground forces that controlled the city. The French and the Poles joined the British and Norwegian soldiers. The Germans were outnumbered five to one and defeated in the night of 27 to 28 May 1940. The Allies celebrated their first common victory, but another battle began in the West - the Germans launched a monumental campaign against France. The Allies were forced to pull out their forces from Norway, however, they have already managed to destroy all transport infrastructure. The North remained exposed to Germans who reopened port after only seven months…

The medal maker MgA. Joseph Oplištil dedicated the reverse side to the scene from the naval battle of Narvik, when British destroyed its German counterpart. The reverse composition is supplemented with the anchor symbol and the English inscription BATTLE OF NARVIK. The obverse side is common to the entire miniseries entitled War Year 1940. It bears the flags of states that faced the German attack in the form of shields and lightning that symbolize the Nazi war. Since the Pacific Island of Niue provides the Czech Mint with a license to mint its own commemorative coins, the obverse side bears its necessary attributes, which means the name and the portrait of Queen Elizabeth II, the nominal value of 5 DOLLARS (NZD) and the year of the issue 2020.

The complete collection of four war coins can be stored in the thematic tin etui that is also offered by the Czech Mint.