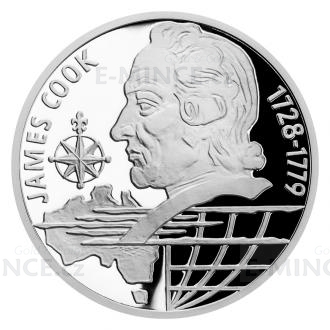 The collector's mini-series entitled “On Waves” presents brave men who dedicated their lives to exploring cruises and discovering white spots on the world map. James Cook is the first sailor to be honored by the silver coin of the Czech Mint.

James Cook's life could to be a part of an adventure novel. He came from a family of a simple Scottish worker, he trained to be a merchant, but decided to be a lifeguard. He became a war hero, and finally  one of the most famous naval captains of all time… James Cook saw tropical islands and horizons covered by ice, he mapped New Zealand, discovered Australia and reached the Antarctic Circle. He enabled natural scientists to discover exotic species, established friendly relationships with natives, and his maps still amaze with their accuracy. He provided Britain with access to new sources, became a member of the Royal Society and received recognition of King George III. and award for his healing method for curing scurvy. Although he was a captain with a lifetime income, he had no desire to rest. He had spent ten years on the journey, however, he died in a battle with Hawaiian natives when he searched for a northern route around America. But his legend lives on…

Academic sculptor Michal Vitanovský placed a portrait of James Cook on the reverse side of the coin, supplemented it with the captain's name and life years. “I found a rich source of inspiration in period portraits, although the profile picture is less common among them. I supplemented the captain's head with meridians of longitude and parallels of latitude of the southern hemisphere, the outline of Australia, and the directional rose transferred from the reproduction of Cook's manuscript, ” author of the relief says. The Czech Mint coins are issued with the license of the Island of Niue (visited also by Captain Cook), and therefore their obverse side contains the necessary attributes of this issuer - the nominal value of 2 DOLLARS (NZD), the portrait and the name of Queen Elizabeth II. and the year of the issue 2020. The composition of the obverse side, which is common to all mini-coins of the series, is further supplemented with the depiction of a sailboat as a symbol of overseas discoveries.

The spectacular packaging builds an integral part of the coin. Moreover it contains the treatise on Captain Cook's voyages and original drawings by Michal Vitanovský.