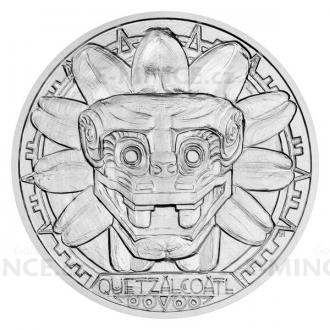 Gods of the Universe

Many years have passed since the polytheistic religions flourished in every corner of the world, however, they are still in the spotlight. Therefore the Czech Mint dedicated a series of commemorative coins to the ancient deity of the Greek, Scandinavian, Slavic, South American and Egyptian pantheon. First of all, Greek Zeus appears in pure silver.

The supreme deity of ancient Greece embodies order. It rules not only the people but also the other gods from the top of Mount Olympus. Zeus does not hesitate to intervene in the lives of mortals. He will send thunder and lightning to those who dislike him, but he can also love. Especially women. He torments his divine wife Hera by love affairs. He rarely appears in real form - he likes transformation and seduces his chosen ones in all possible forms. If there were no love escapades, the world would be deprived of a number of gods, demigods and heroes - for example, the most powerful man Heracles or Helen, the most beautiful woman of the ancient world. Despite his divine power, Zeus is not omniscient or omnipotent, and is not infallible at all. Like all the gods of the Greek pantheon, he has good and bad human qualities - he can be kind, generous and righteous, but at the same time he has a great ego, can get easily angry and can be vengeful, which Prometheus experienced himself.

The reverse side of the coin was processed by medal maker Vojtěch Dostál, DiS., and it is dominated by a bust of Zeus, who is about to throw one of his lightnings. In accordance with ancient depictions, God takes the form of a strong and imposing man with wavy hair and beard, wearing a cloak called himation over his shoulder. The reverse side composition is supplemented with the inscription ZEUS, together with the characteristic Greek ornaments. They also appear on the obverse side of the coin, supplemented with ornaments of Scandinavian, Slavic, South American and Egyptian origin. The obverse side is common to the whole cycle of divine coins. Since the Czech Mint coins are issued with the license of a foreign issuer, the island of Niue, the obverse side bears the necessary attributes – the nominal value of 10 DOLLARS (NZD), the name and the portrait of Queen Elizabeth II. and the year of the issue 2020.

The universal gods are immortalized on coins that weigh five troy ounces.