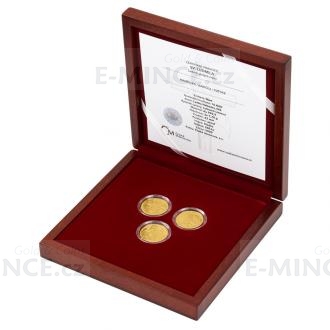 The Czech Mint dedicated the three gold coins to another religious symbol of our country - St. Ludmila - after St. John of Nepomuk.

Although Ludmila is the first Czech woman whose name has been historically documented, we learn of her life mainly from legends. She was a daughter of the ruler of Pšov and married the Přemyslid prince Bořivoj I. When he visited his son-in-law, the Great Moravian Prince Svatopluk, he met the apostle Methodius. He was captivated by his faith so much that he was baptized immediately. Princess Ludmila also received the baptism. Despite the fact, she grew up in a pagan family and accustomed to sacrificing to the Slavic gods, she quickly forgot and got totally devoted to Christian principles. In an effort to get closer to Christ, she became the mother of the poor, the light of the blind, and the helper of widows and orphans. Despite the care of the needy, she did not neglect the family fireplace and gave birth to six children. Prince Vratislaus was one of the sons of Bořivoj and Ludmila. He was a competent ruler, who was the first one that expanded beyond the Czech basin. Wrocław married the pagan Drahomíra, who accepted Christianity but did not like neighbors. She did not even like her mother-in-law Ludmila and she let her strangle when Vratislaus died. She wanted to gain undisturbed rule over the country and absolute influence over her sons. These were named Wenceslas and Boleslav, and their legendary fratricide that sanctified one of them and made the other the creator of a strong Czech state, laid the foundations of Czech statehood. Wenceslas worshipped his grandmother and began to build her cult after her death. She was sanctified eventually…

On the reverse sides of the individual coins, which were made by the medal maker Lenka Nebeská, DiS., there you can find depictions of Ludmila in three roles - as the wife of Prince Bořivoj I. who brought Christianity to Bohemia, as the grandmother of St. Wenceslas, who became the ideal of a Czech ruler, and finally, as the first Czech saint woman, who died martyred at the behest of her daughter-in-law named Drahomíra. The obverse side is common to all coins - its perimeter presents a scarf that Ludmila was strangled with. Since the Czech Mint coins are issued with a foreign license of the island of Niue, the obverse side bears the name and the portrait of Queen Elizabeth II, the nominal value of 10 DOLLARS (NZD) and the year of the issue 2020.

Set of coins is stored in a luxurious wooden box.