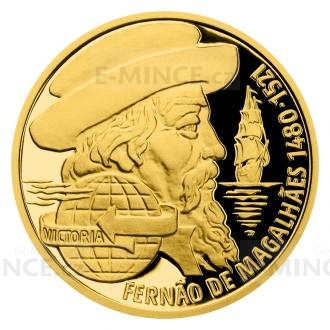 The Czech Mint commemorates the second voyager Fernão de Magalhães by issuance of gold coins from mini-series entitled On Waves.

Fernão de Magalhães served his native Portugal many years. He expanded its colonial empire, took part in a series of battles, and learned of territories rich in rare spices. His desire for exploring cruises, however, was not consistent with the ideas of the Portuguese superiors, and he fell into disfavour. When Magalhães' proposal to go to the "Spice Islands" was rejected several times, the sailor renounced his nation. He offered his services to Spain with which Portugal was competing for the rule of the world. Under the Spanish flag, he embarked on a journey that changed the paradigm of the world. General belief was that the earth was flat, and people who thought it was round were burned to death ... European sailors who wanted to reach Asian waters, needed to sail around Africa to the east, but this route was dominated by the Portuguese, so Magalhães headed west to reach Asia from the east. A fleet of five Spanish caravels, which set out on a journey around the world in 1519, went through hell. Magalhães had to face stormy weather and sailors — he hadn't even found his way to the Pacific Ocean and had lost two ships. The situation on the other side of the planet was not easier. The sailors did not see the mainland and suffered without food and water for four months. When they reached the Philippines, they were involved in a local war that deprived Magalhães of life ... But the expedition did not fail and one of Magalhães' ships returned home in 1522. Victoria has proven that the Earth is round and provided Magalhães with immortality …

Academic sculptor Michal Vitanovský placed a portrait of Magalhães on the reverse side of the coin that was supplemented with the captain's name and life years. “The portrait of the voyager from the right profile is reconstructed according to the contemporary picture. On the right side there is the ship Victoria, which sailed as the only one of Magalhães´ ships around the globe. Its name appears on the left side of the lettering tape around the globe, ”says the author of the relief. Coins of the Czech Mint are issued with the license of the island of Niue, therefore, their obverse side bears the necessary attributes of this issuer. The attributes are the nominal value of 10 DOLLARS (NZD), the portrait and the name of Queen Elizabeth II., together with the year of the issue 2020. The composition of the obverse side, which is common to all mini-coins of the series, is further supplemented with depiction of a sailboat as a symbol of overseas discoveries.

Spectacular packaging builds an integral part of the coin. Besides the story about Captain Magalhães' world-wide voyage, it contains original drawings by Michal Vitanovský.