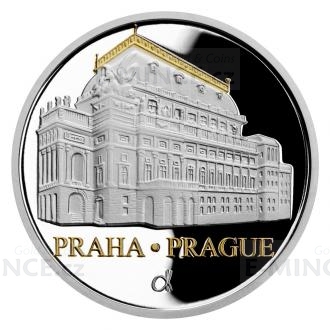 The Nation to Itself [Národ sobě] - who would not know the motto that symbolizes Czech patriotism and cultural heritage, which became the foundation stone of the National Theater. The Czech Mint used the “Golden Chapel” as the main motif of the silver coin beautified by selective gilding from a free cycle dedicated to Prague historical sights.

Own theater was one of Czech honor and pride in the 19th century. It was to serve the development of the Czech language, which was oppressed by German, and to support the production of domestic dramas and operas. The cooperation of all social classes enabled the establishment of the National Theater and the ceremonial laying of the foundation stone, which took place in 1868, became a national political manifestation. However, the Czechs did not enjoy their own theater for a long time because the neo-Renaissance building, which was the work of our greatest artists, was destroyed by fire in 1881. “It was Friday, the blackest Friday of our modern national life. We came to the countryside only on Saturday noon and I still see my crushed father sitting at the table, and my mother crying in the corner, ” wrote the poet Jaroslav Kvapil. At that time, however, real Czech coherence became apparent - children learned about money boxes in which our villages and towns collected money to renew the theater. The Czech National Revival culminated in the opening of the National Theater, when visitors were welcomed by the tones of Smetana's Libuše already in 1883.

The reverse side of the coin, which is the work of the medal maker David Kružliak, is dominated by a general view of the National Theater. The roof is framed by a gilded balustrade on the coin. The bilingual inscription PRAHA - PRAGUE is also gilded. Since a coin is issued with a foreign license of the island of Niue, the obverse side bears the necessary attributes of the issuer - the name and the portrait of Queen Elizabeth II, the nominal value of 1 DOLLAR and the year of the issue 2020.

Infant Jesus of Prague, Charles Bridge and the Old Town Astronomical Clock appear together with the National Theater in the cycle of Prague sights.