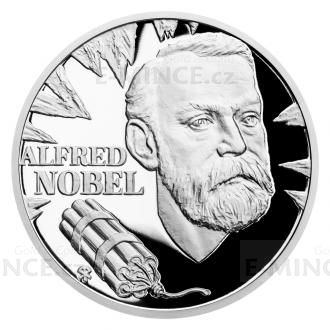 Geniuses of the 19th century

The Czech Mint commemorates the third legendary inventor Alfred Nobel by the issuance of the silver coin from miniseries Geniuses of the 19th century.

Alfred Nobel was born into a wealthy family of a Swedish manufacturer. He was interested in literature, languages and natural sciences. He gained considerable knowledge of chemistry during his studies and he met the Italian scientist Ascani Sobrero, the inventor of nitroglycerin, at the University of Paris. Sobrero warned against using his invention - he considered an unstable explosive too dangerous to be handled responsibly. However, nitroglycerin seized the enterprising Nobel and he began experimenting with it. He was looking for ways how to produce it safely and how to manipulate it. He redoubled his efforts after a tragedy in the family factory - Alfred's younger brother Emil died during the preparation of nitroglycerin. The Swedish government banned the construction of explosives factories, therefore, Nobel was forced to experiment aboard a cargo ship. The result of his efforts was a formable mixture of liquid nitroglycerin and loose diatomaceous earth which was patented as dynamite in 1867. Unlike nitroglycerin, dynamite was resistant to pressure, shock, and temperature changes. Nobel also invented a detonator that enabled the explosive to be shaped into characteristic cylinders to be easily detonated. The success of the invention surpassed Nobel's wildest dreams - the potential of dynamite was quickly discovered not only by builders and miners, but also by soldiers. Although Nobel viewed humanity with skepticism, he hoped that a new destructive force would help end violence. "The day two army corps will be able to destroy each other in a second, all civilized nations will turn away from the war in terror and dissolve their armies," the inventor said. Unfortunately, he was wrong… Nevertheless, he continued to invent - for example, he designed explosive gelatin or smokeless gunpowder, owned a total of 355 patents and amassed fabulous property. However, he lacked something in his life. Only Austrian peace activist Bertha von Suttner helped him find his sense of being, leading him to the idea of sharing his wealth with personalities who make the world a better place. This is how the famous Nobel Prize was founded - the highest award a scientist, artist or statesman can achieve today.

The commemorative coin was processed by the medal maker Asamat Baltaev, DiS. The reverse side bears a charismatic portrait of the inventor, who considered himself very ugly, supplemented with the inscription ALFRED NOBEL. The explosion in the background symbolizes Nobel's numerous explosive discoveries, and there is also a bundle of dynamite with an incendiary cord. The obverse side of the coin bears drawings of various inventions from the 19th century. Since the coins of the Czech Mint are published with the foreign license of the island of Niue, they bear the name and portrait of Queen Elizabeth II, the nominal value of 1 DOLLAR (NZD) and the year of issue 2020.

You can store Alfred Nobel's coin in a special collector's box that you will also find in the Czech Mint's menu.