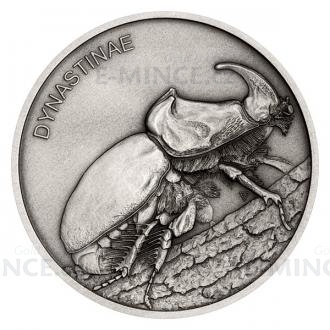 The Czech Mint dedicated the first silver coin from the second edition of the series “Animal Champions” to Rhinoceros beetles. These beetles, which occur in many variations around the world, are proportionally the strongest animals in the world.

While Rhinoceros larvas are being developed for up to seven years, adult individuals live just for around two years, when their only goal is to produce offspring. Not only their unprecedented strength, but also the special gear that has given this insect subfamily a name, help males to fight rivalries in love. Rhinoceros beetles grow up to 15 centimeters in length and despite their size they can fly. They are protected not only by their respectable dimensions, but also by a solid chitin exoskeleton. Unlike vertebrates, they have muscles inside this outer skeleton and thus have much more room to attach. As a result, Rhinoceros beetles can carry up to 850 times their own weight. You would have to lift 65 tons that corresponds to a battle tank to equal them... And what does a beetle fight for a female favor look like? The two males snap their horns together and start crushing. The winner, who remains firmly in place, lifts the loser up and throws him off the tree or makes him retreat. Beetle match, in which two rhinoceros beetles are placed on a hollow branch in which the female is hidden, is a popular gambling game with considerable bets in Asia.

Medal maker Petr Patka, DiS., chose the European rhinoceros beetle that can be found in Czech nature. He depicted it climbing a branch on the reverse side, and added an inscription DYNASTINAE - the Latin name of the insect subfamily of Rhinoceros beetles. The surface of the coin is adorned with a patina, which enables the finest details of an armored beetle body to excel. The composition of the obverse side presents a pair of natural sceneries and attributes of the island of Niue, which provides the Czech Mint with a foreign license to issue its own commemorative coins. These are the profile and the name of the ruler Elizabeth II, the nominal value of 1 DOLLAR (NZD) and the year of the issue 2020.

The coin is set in a spectacular packaging. It contains photographs and Czech-English text describing the record-breaking quality of Rhinoceros beetle. Do not forget that coins from the Animal Champions cycle can be stored in a convenient collector´s box.