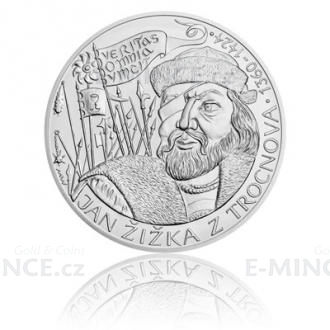 600 years have passed in 2019 since the first Prague defenestration, which launched the Hussite wars. At the same time, a name that has begun to appear in the written sources shook Europe. The Czech Mint dedicated the kilogram silver coin to Jan Žižka.

A national hero, an undefeated general, a brilliant strategist, doom of the crusaders and the implacable guardian of the legacy of Master Jan Hus, but also a thief, killer, heretic and destroyer of monasteries. Hussite legend Jan Žižka of Trocnov has many faces. His life, which is shrouded in mystery, gives enough space for speculation. It is uncertain whether he was born in a storm under a mighty oak, whether and why he was blind, whether he led the first Prague defenestration, or whether he wanted the drums to be made from his skin after his death. The contradictory image of a medieval warrior is also supported by the fact that some regimes tried to eradicate his legacy, while others put him on a pedestal. One thing is certain - the man who turned the attention of the whole Christian world to a small country in the heart of Europe has an unforgettable place in our history…

The majestic coin was made by the academic sculptor Majka Wichnerová, who also processed a kilogram silver coin with the Hussite king George of Poděbrady. The obverse side presents a bust of Jan Žižka with a characteristic fur hat and eye band. In the background there are iconic Hussite weapons, including flails, as well as two flags. The first one bears the Hussite chalice, the second one bears the Latin biblical apocrypha VERITAS OMNIA VINCIT (Truth prevails) often quoted by Jan Hus. The inscription on the obverse side presents Žižka's name and life dates. The reverse side of the coin is dominated by the notation of the immortal Hussite chorale Ye Who Are Warriors of God. Since the coins of the Czech Mint are issued with the license of a foreign publisher, the island of Niue, the obverse side still bears its necessary attributes - the name and the portrait of Queen Elizabeth II, the nominal value of 80 DOLLARS (NZD) and the year of the issue 2019.

The coin is stored in a luxurious wooden etui and is accompanied by a special numbered certificate of authenticity.