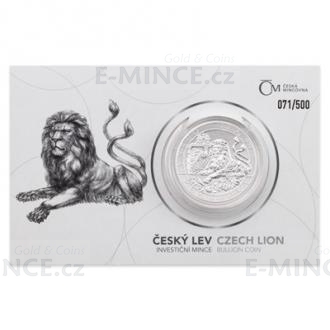 Investment coins impress collectors who know that a sophisticated portfolio can not miss precious metals. However, Czech lions,investment coins issued by the Czech Mint with a foreign licence, also have an artistic and collecting value. Moreover they are minted in an unusual version "piedfort". This means that the silver coin weighing two troy ounces, which is apart from that a hot news of 2019, differs from its established counterpart not only in double weight but also in double thickness. Legend of Bruncvik is the most famous story about how the lion became the czech national symbol. Greater explanation is provided by old chroniclers. In 1158, Emperor Frederick I. Barbarossa rewarded Prince Vladislaus II. a royal crown and new heraldic animal - a silver lion on the red field that replaced the eagle. The beast represented the virtues of a knight, strength and courage that Vladislaus demonstrated when served the Emperor during the conquest of Milan. And how did the heraldic figure come to other tail? Heroism played the role again. King Ottokar I helped Emperor Otto IV. in the struggle against the Saxons in 1204, and the Czech lion got a second tail that distinguished it from the beasts of the other nations and brought a unique prestige. Medieval writers, however, loved to embellish their stories, so they can not be a reliable source of information. The first truly documented Czech lion was a symbol of the Přemyslids dynasty and appears on the riding seal of Vladislav Jindřich in 1203. The lion appeared on the state emblem thanks to Ottokar II, the King of Iron and Gold. All variants of the Czech Lion´s investment coins weighing more than one troy ounce were modified in 2019 and neither a two-ounce silver coin is an exception. In addition to the two-tailed beast, the reverse side presents two other symbols of the Czech statehood, which means the St. Wenceslas crown and the flaming St. Wenceslas Eagle. The obverse side bears the attributes of the island of Niue, which provides the Czech Mint with a foreign license to coin its own coins. The attributes are the portrait and the name of Queen Elizabeth II, the year of the issue 2019 and the nominal value of 5 DOLLARS (NZD). All of this is supplemented by linden branches. The patriotic relief of the coin is the work of the medal maker Asamat Baltaev, DiS., who was inspired by the original design proposal made by Jaroslav Bejvl. The total schedule of issuance counts 5000 pieces - 500 pieces are placed in special numbered packaging, which reminds us of 100th anniversary of the Czechoslovak currency in 2019. Further 4470 pieces are available separately in a protective capsule and the remaining 30 pieces are included as part of a set of high-weight silver coins.