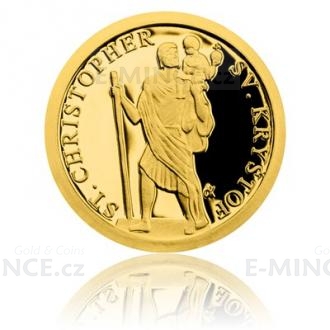 Saint Christopher is a patron of all pilgrims - travellers, motorists, airmen, sailors, ... - a protector against sudden death and a helper in need. The Czech Mint dedicated the fourth gold mini-coin from the cycle Patrons to him.

Christopher was born in the Middle East in the 3rd century AD and came to the world as a huge furry newborn. The parents were unpleasantly surprised, and so they gave him the name of Reprobus – in other words Rejected. When he grew up, he was looking for a job worthy of his greatness and strength. At first he served the king, whom he considered the most powerful in the world. When he discovered that the king was afraid of hell, he entered the service of Satan. He mugged, robbed, and killed. But once he sat under the cross and found that Satan had left him in fear. Reprobus understood that there was someone even more powerful - Jesus Christ. He learned that he would find Jesus when he treated people as Jesus. The hermit advised him to use his power to help people who were trying to cross the dangerous river. And Reprobus did so. People liked him because they found help and understanding. As the years passed, the tired Reprobus began to wonder if it all made any sense, and decided to return to his old corrupt ways. A little boy was the last one he reluctantly carried across the river. The child was getting heavier and heavier, so they barely crossed the river. When Reprobus wondered, the boy replied, "You have loaded the world and the one who created it." The Christians then gave the giant a new name, Christo-forus, which means "the one who carries Christ."

In accordance with the Christian legend, Saint Christopher is portrayed as a burly bearded man with a cane carrying a child - a little Jesus - on his shoulders. The medal maker David Kružliak attributed this form to him on the reverse side of the coin. The scene is surrounded by a Czech-English inscription SV. KRYŠTOF - ST. CHRISTOPHER. The obverse side then presents the profile and the name of Queen Elizabeth II, the year of the issue 2019 and the nominal value of 5 DOLLARS (NZD), which means the attributes of the island of Niue, which provides the Czech Mint with a foreign license to mint its own commemorative coins.

The gold coin is set in a special Czech-English packaging. The whole will serve as a lucky talisman, a gift and an original addition to the collection.