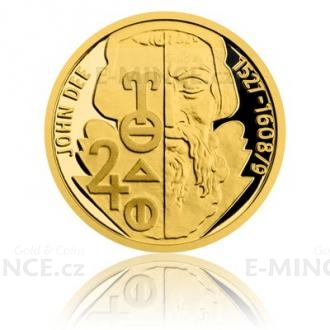 The history of alchemy, mysterious activities combining science and art, are inherently connected with the effort to produce yellow metal. Therefore, the commemorative coins that are made of pure gold commemorate the most important alchemists living on our territory during the Renaissance. Firstly, the Czech Mint introduces John Dee in the four-part miniseries.

The main purpose of the alchemical work was the transformation of non-precious into precious one. Among the alchemists there are the predecessors of today's chemists who were primarily interested in the laws of matter. Alchemists experimented with the same fervor, but lower motivation to gain wealth and power. The aim of their pursuit was to transform the lead into gold. John Dee, an important intellectual living in Elizabethan England, a philosopher, a mathematician, and an alchemist is a good example of a time scientist, for whom knowledge was more valuable than wealth. "He spent a short but important period of his life at the Court of Rudolf II in Prague. He came together with Edward Kelley. He also spent some time at South Bohemian estate of William Rosenberg. He was admired for his experiments and knowledge. It is speculated that his secret mission was intelligence in favor of the English Queen Elizabeth. He had not been able to regain his original position after he returned home and died in oblivion, " said academic sculptor Michal Vitanovský, who is the author of the coin.

"Although the form of the four Renaissance alchemists represented by the cycle is known from their period depictions, the coins do not depict portraits. The faces, in the position en face, are divided by the vertical line. There are only half of the historical portraits that lack some characteristic details, such as headgear. The other half of each coin consists of a smooth surface with some of symbols used in astronomy, astrology and alchemy. These brands have had multiple meanings and graphic modifications - although we can not read them reliably today, they used to be a language of alchemists“, Michal Vitanovsky explains. The obverse side of the coin bears the name and the portrait of Queen Elizabeth II, the nominal value of 5 DOLLARS (NZD) and the year of the issue 2019, which means the attributes of Niue Island that provides the Czech Mint with the license to coin its own commemorative coins but also a variety of alchemic brands dominated by the sun.

An attractive packaging made in the style of an alchemist scrapbook builds an integral part of the coin. The coin contains an original drawing that depicts John Dee in addition to the co-authored text.