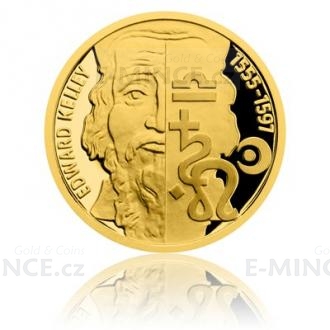 The Czech Mint has issued the gold coins from Alchemists miniseries in order to introduce the world-renowned names as well as the lesser-known but equally interesting characters of the world of alchemy that have worked in our country. Edward Kelley undoubtedly belongs to the most famous ones.

Prague Court of Emperor Rudolf II. attracted many alchemists. Scientists not unlike today's chemists who wanted to know the laws of matter, and charlatans with the ability to impress and gain wealth and power. The second group could include the famous Edward Kelley, who was a controversial figure with a criminal past. He worked as a city scribe who was punished for cheating by cutting off both ears. He met alchemist John Dee in his native England, which completely changed his life. Thanks to him he got to the Renaissance Bohemia, where he stayed for good unlike his older colleague. He enjoyed the great favor of the Emperor since he impressed him by the promise of miracles in the form of the elixir of youth or the conversion of lead into gold. He got rich, bought various goods and became the owner of a Prague house, which was later called Faust House. He fell into disfavor because he could not fulfill promises. He ended up in jail and finally committed suicide after two unsuccessful escape attempts. According to another story, he managed to escape from prison and began a new life with a different identity.

“Although we known all four Renaissance alchemists from their period paintings, you will not find real portraits on the coins. The face, in the en face position, is divided by a vertical line. I used only half of the historical portraits, which include some characteristic details, such as headgear. The other half of each coin has a smooth surface planted with some symbols used in astronomy, astrology and, of course, alchemy. These brands used to have more meanings and graphic modifications - even though we can not read them reliably today, in the past they formed a language that the alchemists understood well, ” academic sculptor Michal Vitanovský explains. The obverse side of the coin bears a number of alchemical brands that are dominated by the sun, but also the name and the portrait of Queen Elizabeth II, the nominal value of 5 DOLLARS (NZD) and the year of the issue 2019, which means the attributes of the island of Niue that provides the Czech Mint with a license to mint its own commemorative coins.

The coin is stored in an attractive packaging in the form of an alchemical notebook. It contains the accompanying text of the author as well as the original drawing that captures Edward Kelley.