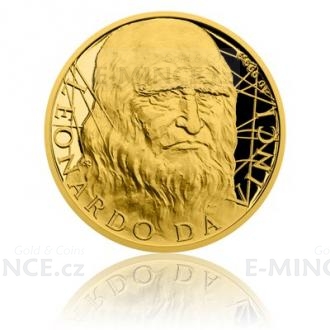 The Czech Mint dedicated a free cycle of gold half-ounce coins to the world's most important artists and thinkers. It introduced Leonardo da Vinci in 2019. His abilities seem superhuman to us, and his mysterious personality has fascinated us for 500 years since he died.

Leonardo da Vinci is considered to be an example of a Renaissance man - a truly universal genius. The extent of his knowledge is unparalleled in our history, however, he became famous as a painter and engineer. He was also a sculptor, an architect, a naturalist, a musician, a writer, a cartographer,… He enriched us with paintings and diaries full of various drawings, schemes, calculations, diagrams and ciphers. However, if we forget about his dehumanizing nickname genius, we find that he personified above all humanity with all its possibilities and shortcomings. His notes, in which he shared his thoughts with future generations, show his extraordinary creativity and diseased postponement of the tasks, the extraordinary contemplation, together with the children's playfulness…

Asamat Baltaev, DiS. processed the reverse side of the coin inspired by a drawing that is widely regarded as a self-portrait created by Leonardo at the age of sixty. The obverse side then presents fragments of da Vinci's masterpiece, headed by the concept of a colossal statue of a horse of the duke of Milan, under whose hooves the defeated enemy crouches. The coin was issued with the foreign license of the island of Niue, therefore, it bears the necessary attributes of this issuer. These are the name and the portrait of Queen Elizabeth II, the nominal value of 25 DOLLARS and the year of the issue 2019.