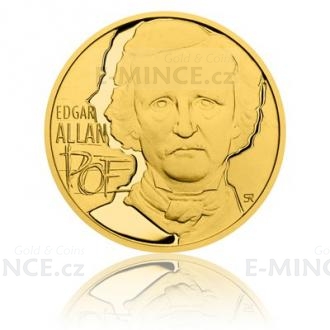 The Czech Mint dedicated the free cycle of gold half-ounce coins to the important personalities of world history - narrators and thinkers. So far it has introduced a legendary poet, an immortal playwright, a brilliant composer, a religious reformer, a controversial painter and a Renaissance genius. Now this prestigious list is expanded by the master of horror - Edgar Allan Poe.

Edgar Allan Poe was an American poet and writer living in the first half of the 19th century, the founder of the detective genre, famous for stories full of tension and mystery. Who would not know the poem The Raven, in which an unhappy man is tormented by a mysterious bird and a memory of deceased love, or the story The Pit and the Pendulum, which tells the story of a prisoner tortured by the Spanish Inquisition… His horror work, but also the hardships of life and tragic death contributed to the fact that Edgar Allan Poe is perceived as a cursed genius with a tortured soul. He lost both parents in his childhood - his father was an alcoholic and left the family, his mother died of tuberculosis. His adulthood was also unhappy. His wife — like his mother — had died very young of cochlear, and Poe — like his father — had fallen into the alcohol demon. Poe was the first American writer to make his living exclusively by writing, and although his work was successful, it was not enough for a good living. He died under uncertain circumstances not long after he was found in a stranger's dress and in a catatonic state on the Baltimore sidewalk. However, his work, which is still fascinating and inspiring, has ensured him immortality.

The young artist Roman Shamilyan became the author of the commemorative coin. The reverse side is dominated by a charismatic portrait of the writer accompanied by his full name. The obverse side then presents the raven. Since a coin is issued with a foreign license of the island of Niue, the obverse side bears the necessary attributes of this issuer - the name and the portrait of Queen Elizabeth II, the nominal value of 25 DOLLARS and the year of the issue 2019. Relief reflects Poe's torn soul.

A limited schedule of issuance counts 200 pieces. Each coin includes an illustrated certificate of authenticity.