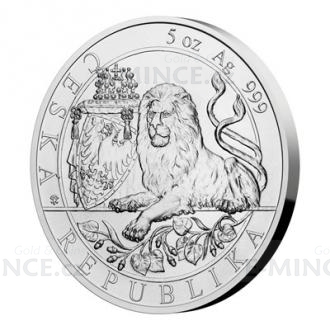 The "Czech Lion" investment series was issued with a foreign license by the Czech Mint and it was complemented with a silver coin weighing five troy ounces at the wish of investors.

Czech lions - especially silver ones - have been acclaimed for free years not only at home but also abroad. They have ranked alongside the world's famous counterparts, and satisfied investors from the Czech Republic, Slovakia, Hungary, Germany, China, Hong Kong, South Korea, Canada and the United States of America included them in their portfolios. No wonder. Silver has been proven as an investment tool for centuries, and a number of conservative investors who prefer it to more widespread yellow metal is growing. Silver offers besides the medium to long-term potential for revaluation also the notable advantages of industrial metal that are applied in a number of key technological sectors and ensure that precious metal is still highly desired.

All variants of the Czech Lion investment coins, weighing more than one troy ounce, were modified in 2019. A new five-ounce silver coin was no exception. The reverse side presents the traditional symbols of the Czech Republic, which means the two-tailed lion, the St. Wenceslas crown and the flaming Saint Wenceslas eagle on the shield. The obverse side bears the portrait and the name of Queen Elizabeth II, the year of the issue 2019, together with the nominal value of 10 DOLLARS (NZD). Those are the necessary elements of the island of Niue, which provides the Czech Mint with a foreign license to coin its own coins. All of this is supplemented by linden branches. The patriotic relief was made by the medal maker Asamat Baltaev, DiS., who became the successor of the artist Jaroslav Bejvl, who died shortly after the original design of the coin had been created.

Each coin is stored in a protective capsule that protects it from undesirable external influences.