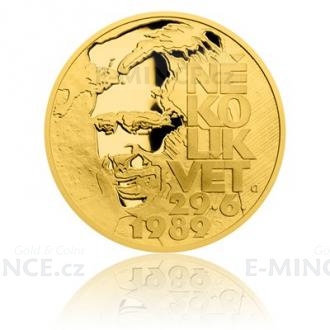 The Czech Mint issued the third gold coin from the miniseries "Journey to Freedom“ to the 30th anniversary of the fall of the communist regime. The coin commemorates the petition entitled "Several sentences", whose central theme was freedom.

"Movement in society is beginning to clash more and more with the immobility of power, and social tension is growing and the danger of an open crisis is threatening. None of us want such a crisis. That is why we appeal to the leadership of our country to understand that it is time for real and profound systemic changes… ”

The factual and non-aggressive petition, the main organizer of which was Václav Havel, was not a threat to the regime at that time, but its popularity surprised the Communist functionaries. It was open, could be signed by everyone, and it was impossible to disagree with it. The manifesto was signed by more than 40,000 people untill November 1989. It required the release of political prisoners, freedom of assembly, non-pursuit of independent initiatives, termination of censorship, non-limitation of believers, permission of environmental debate and free exchange of ideas. Thus a barrier between dissent and the general public was broken for the first time.

The concept of the reverse side of the mintage follows the previous coin of the medal maker Vojtěch Dostál, DiS., with Jan Palach and Karel Kryl. It bears a portrait of Václav Havel in simplified outline accompanied by the inscription SEVERAL SENTENCES 29.6. 1989. The obverse side, which is common to all coins from the miniseries, was dedicated to St. Wenceslas - the symbol of patriotism and continuity of our statehood. The Czech Mint's coins are based on the license of a foreign issuer which is the island of Niue, therefore, their obverse side bears its necessary elements – the name and the profile of Queen Elizabeth II, the nominal value of 10 DOLLARS (NZD) and the year of the issue 2019.

You can store the complete four-part miniseries in a wooden collector´s etui which you can also find in the offer of the Czech Mint.