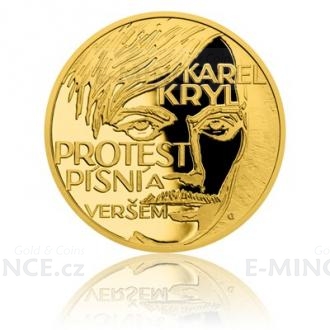 The Czech Mint issued the second coin of the four-part miniseries "Journey to Freedom" in order to commemorate the 30th anniversary of the Fall of the communist regime. The gold coin is dedicated to Karel Kryl.

Although he had been a musician for several years before 1968, Karel Kryl became famous for the Prague Spring. More than a quarter of a million pieces of his most famous album, "Close the Gate, Little Brother" have been sold and the central song of the same name about a wolf who wanted the lamb became one of the symbols of resistance to the occupation of Czechoslovakia. At that time, a 24-year-old artist wrote music and lyrics himself. He used his knowledge of politics and religion, and his repertoire included satirical and serious songs reflecting society and poetic and melancholic ballads. The protestsongs spread abroad, especially to neighboring Poland, where perhaps they were even more successful. The growing influence of the "poet with the guitar" left the Communist regime unnoticed and devasted artist who emigrated to West Germany in 1969, just a week before the border was closed. "It's hard to get used to life in a cage," he said later. His other works were published in exile, where he became an icon and worked as an editor of Free Europe Radio. He returned to a free homeland in 1989, but only for a short time. He was disappointed by the development of the post-revolutionary events, was seriously disintegrated by break-up of Czechoslovakia and bittered. He died of a heart attack at the age of fifty, but his songs are alive ...

The reverse side of the mintage follows the previous coin with Jan Palach. The medal maker Vojtěch Dostál, DiS., enriched it with a portrait of Karel Kryl in the simplified outline, which he complemented with the inscription PROTEST IN SONG AND VERSE. The obverse side, which is common to all miniseries coins, is dedicated to St. Wenceslas - the symbol of patriotism and continuity of our statehood. The Czech Mint coins are issued with the license of a foreign publisher which is the Niue Island. Their obverse side therefore bears its necessary attributes. These are the name and the profile of Queen Elizabeth II, the nominal value of 10 DOLLARS (NZD) and the year of the issue 2019.

You can store the four coins in a wooden collector´s etui which you can also find in the offer of the Czech Mint.