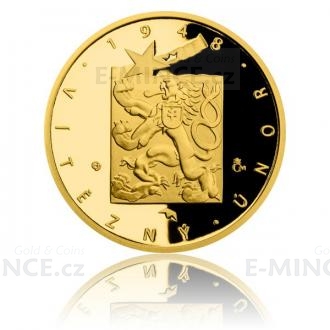 70 years have passed in 2018 since the infamous Communist coup in 1948, called by its initiators "Victorious February“. The second gold coin of the Czech Mint from the miniset "Revolutionary Eights" commemorates the events that have influenced the fates of the Czechoslovaks for at least four decades.

Communists have been preparing for power in Czechoslovakia since the end of the Second World War, when our territory was largely liberated by the Red Army. They have exerted pressure on President Edvard Beneš during the three post-war years and undemocraticly influenced political, trade union and social life, and put their people in key positions in the army and the police. On February 13, 1948 the ministers from the democratic parties run out of patience and opposed the arbitrary behavior of the communists at the government meeting. Then, on February 20, the national socialists, the populars and the members of the Slovak Democratic Party decided to resign in the hope of inducing the president to appoint a clerical government and call early elections. But this did not happen because the social democrats and non-state ministers did not join the demise. The Communists then declared that they were the ones who held a democratically elected government, and denounced the others as spoilers. Trade unions in their power organized demonstrations and threatened by a general strike. People's militia shoved with weapons, and president Benes yielded to pressure. He accepted the resignation, approved Klement Gottwald's proposal on 25 February and the government was supplemented by "reliable comrades". Communists seized power without a single shot and Czechoslovakia became the satellite of the Soviet Union, and a totalitarian regime was established.

Author of four-part miniset, expert medal maker and teacher MgA. Josef Oplištil continues with style of the first minisets issue. The events of individual years are expressed through the transformation of the two-tailed czech lion. In 1948 our state symbol on the reverse side of the coin is without its crown cut off by a five-pointed socialist star. The coins of the Czech Mint are issued under the license of a foreign publisher, which is the state of Samoa, and their obverse side therefore carries its essential attributes, which are the national emblem, the portrait and the name of Queen Elizabeth II, the nominal value of 25 DOLLARS (WST), together with the year of the issue 2018. The composition of the obverse side is complemented by the text "TRUTH WINNING", drawn on a ribbon hanging from a lime tree.
Related products