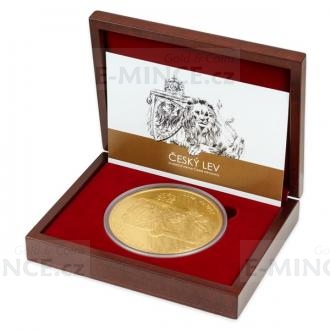 Every mint superpower has its own gold investment coins. They are designed primarily for investors, who want to take advantage of the precious metal, that is time-proven. Since the Czech Republic does not yet have its own purely investment mintages, Czech Mint has decided to rectify it, and do it in style. These kilogram gold coins are the flagship of the new investment series entitled the Czech Nationhood.

The most obvious symbol of the Czech state is the heraldic figure in the form of a lion. But how did this exotic beast get into the sign of the country in the heart of Europe? Help can be found in the rumors about Bruncvík prince, who set out on a journey to far-off Africa, where he helped the king of beasts to fight the terrible dragon. The historians, however, offer a plausible explanation. Our first historically documented state symbol was the flaming female eagle, also said Premyslian or St. Wenceslaus. It is uncertain when it first appeared, but its use is attributed to the already mythical Forefather. What is certain is when it was replaced by the lion - it was the year 1158. At that time the Emperor Frederick  I. Barbarossa honoured the assistance of Prince Vladislav II. with the Royal Crown and new heraldic sign - a silver one tailed lion. The lion represented the virtues of a knight, strength and courage, which Vladislav demonstrated during the conquest of Milan in the service of the Emperor. And how the lion came to the second tail? Again the role of heroism and military assistance - this time King Premysl Otakar I. to Emperor Otto IV.

The two-tailed lion also gives his majesty to this gold coin. The unusually realistic symbol guards the other attributes of our country - St. Wenceslas crown on a pillow and St. Wenceslas' eagle on the shield. The coin was designed by a leading medalist Jaroslav Bejvl. His work, however, was not completed before he died, so his work was continued by Asamat Baltaev, DiS. The obverse side of the coin is dedicated to the essential requisites of the island of Niue, which provides a license to issue the investment coins for the Czech Mint: the portrait of a profile and the name of Queen Elizabeth II., the year 2018 and the nominal value of the coin of 8000 DOLLARS (NZD).

Invest your money in one kilogram of pure gold exempt from VAT in the form of precisely processed patriotic mintage!