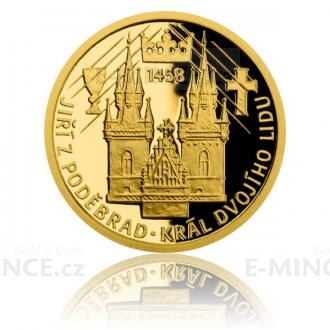 We commemorate the 560th anniversary in 2018 when George of Poděbrady was crowned King of Bohemia. The monarch is often unjustly neglected when compared to St. Wenceslas or Charles IV. He was a man of literally European significance and many of his works far outstripped their time. That's why they became the theme of a four-part miniseries of gold coins of the Czech Mint, the first of which is represented by George as King of two people.

Bohemia and Moravia was called the "Kingdom of two people" after 1436, when the compactness allowed people to freely decide whether to accept ultraquist or to be catholics. This freedom, however, led to numerous confrontations and intolerance. For example, the Prague burgess could only become an ultraquist, while Brno was strictly Catholic. George of Podebrady skillfully lobbed at the border of both these religions. However, he successfully maintained a balance between them, when he had acted as a provincial governor during the reign of Ladislav Pohrobek. Hussitism-oriented George was religiously tolerant even in private life, because both of his wives were catholics. The new ruler seemed to become a member of the ruling dynasties Habsburg or Jagellon when the young King Ladislav died. However, the Czech Parliament elected George of Podebrady on March 2, 1458. The election was very dramatic. Until then, the sovereigns were accepted on the basis of their inheritance or belonging to the traditional ruling families, but George came only from the marital status of the home nobility. Still, he was elected unanimously. The Kalishniks used the status a moderate "Hussite King", while he acquired the favor of catholics by great diplomacy skills. He provided the land destroyed in the Hussite Wars with secured years of peace and prosperity.

Leading medal maker and expert on historical themes academic sculptor Michal Vitanovský became the author of the gold coin. The reverse side is dominated by the Hussite cup, the Catholic Cross, St. Wenceslas crown together with the Tyn Church, where George of Podebrady went to a thank-you worship service after his election. The composition is supplemented by the year of the coronation in 1458 and the inscription GEORGE OF PODEBRADY - THE KING OF TWO PEOPLE. The commemorative coins of the Czech Mint are based on the license of a foreign issuer, which is the Pacific island of Niue. Therefore, the obverse side bears its necessary attributes, which are the name and the profile of Queen Elizabeth II, the nominal value of 5 DOLLARS (NZD), the year of the issue 2018, together with decorative gothic ornament.