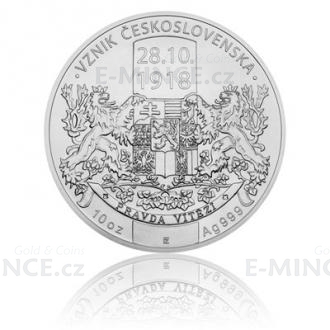 We celebrate the 100th anniversary of Czechoslovakia in 2018, and we have a number of thematic mintages designed primarily for collectors on this occasion. However, the high-weight Czech Mint coin, which was embossed out of ten troy ounces of pure silver, will also attract the investors.

Silver belongs inherently to Czech history. According to the legend it was minted at our territory in the 7th century, but the real growth of silver ore extraction occurred in the 13th and 14th centuries. Rich deposits have been found in Jihlava, Kutna Hora, Jachymov and many other cities that became famous because of that. Intense mining brought special legal rules governing the handling of precious metals, which have become the first of their kind in Europe. At the same time there were mints and coins, the fame of which exceeded the borders of the Czech lands. The first silver coins called denarius were coined in the 10th century. They were replaced by bracteates in the 13th century, and since the 14th century there were groschen coins, which were so valuable that they were commonly used in the surrounding countries. Tolars started to be coined in the 16th century. Their exceptional quality and high silver content have made their name come into history, and the garbled dollar is the most famous currency in the world ...

The nominal value of the Czech Mint coins is also reported in dollars. The reverse side from the studio of the academic sculptor Zbynek Fojtu is dominated by the so-called "great emblem of the Czechoslovak Republic". It has the form of two Czech lions holding the emblems of Bohemia, Slovakia, Carpathian Ruthenia, Moravia, Silesia, Tesin, Opava and Ratiborsko region. They are complemented by ribbon with the national slogan TRUTH WINS hung on lime branches. The reverse side of the coin is enclosed by the inscription THE FOUNDATION OF CZECHOSLOVAKIA with the date October, 28 2018. The obverse side of the coin belongs to the Niue island, which is the foreign licensee for its coining, together with its attributes in the form of the portrait of the Emperor Elizabeth II, the year of the issue 2018 and the nominal value of 25 DOLLARS (NZD).