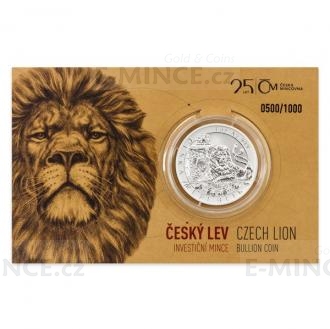 The Czech Lion, the investment coin of the Czech Mint issued in a foreign license, was first introduced in 2017, and besides its investment potential, it attracted by an eye-catching patriotic relief. Therefore, a number of special variants are designed for collectors in 2018. The ounce silver coin embossed in an unusual reverse proof design is one of these.

The coins are usually embossed in one of two versions. For example, you know the quality "standard"  from circulation coins that are clinking in wallets. Their surface is completely matte. In the case of coins minted in quality "proof", only the relief is matte, and the rest of the coin is mirrored glossy. However, there is one option that you are currently seeing in the offer of the Czech Mint for the first time. It is called "reverse proof" and it is, as its name implies, the opposite of quality "proof". The surface of such coins is dull and a protruding relief is characterized by the mirror gloss. Investment coins The Czech Lion receives this unique form in the year when we celebrate the 100th anniversary of Czechoslovakia and the 25th anniversary of the Czech Republic.

Another difference compared to the classic version of the Czech Lion is the changed design of both sides of the coin. Reverse side bears beside the two-tailed lion, the St. Wenceslas crown and the flaming St. Wenceslas eagle also linden branches. A circular composition bearing the coin specification and an inscription of the CZECH REPUBLIC have been also changed. Similar changes have been made to the obverse side. In addition to this, it bears the name and the profile of the Emperor Elizabeth II, the year of the issue 2018 and the nominal value of 2 DOLLARS (NZD), which are the attributes of the island of Niue, which provides the Czech Mint with a foreign license to coin its own coins. The elaborate coin was made by Asamat Baltaev, DiS., who was inspired by Jaroslav Bejvl´s original painting.
Each coin is placed in a special numbered packaging with thematic graphics.